Hayden Panettiere is marrying into a Ukrainian family, and she is joining them to fight for their country. 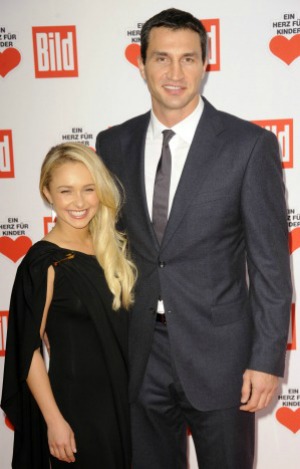 Hayden Panettiere is busily planning her wedding, but she is also paying attention to more important matters in the world. Panettiere’s fiancé Wladimir Klitschko is Ukrainian, and the actress said she has visited the country many times.

“I spend a lot of time in Ukraine, and I completely agree with what Wladimir and [his brother] Vitali are fighting for; we want justice and democracy for Ukrainians,” she told Cosmopolitan UK (via E! News).

In December, Panettiere joined her fiancé and his family in Kiev to join the protestors who are fighting to remain separate from Russia.

“There’s a movement happening here, and you have a chance to make things right, to make things just. You have a right to a democracy,” she told the Ukrainian people during her December visit. “As an American, I want you to know that I stand by you, I support your fight, and I will support it until the country of Ukraine in its entirety reflects the beauty, the true beauty of Ukrainian people. Keep fighting. I love you all.”

And although the actress and her future family are joining the fight in Ukraine, she is also working on planning her wedding.

“We are very laid-back about the wedding plans; we don’t want to rush anything,” she told Cosmo. “We want the day to be fun, happy and stress-free. Growing up, the thought of not getting married never crossed my mind. It was always: I’m going to get married and then I’m going to have a family.”

Panettiere will also be appearing on the April/May issue of Brides, where she shows off a white wedding dress on the cover. She isn’t saying whether it’s her actual dress but did say the magazine will show a brand new side of her.

“When eyes have been on me in the past, it’s been because of an event where people see me as a persona, as Hayden Panettiere the actress,” she said. “For the aisle, you’re the purest, most emotionally stripped down version of yourself, sharing this raw moment with the most important people in your life. It seems very overwhelming!”

Panettiere’s interview in British Cosmo is out now.