Talk about a house divided. On The Originals this week, Klaus has Rebekah running scared with good reason too, especially when he starts pulling white oak stakes outta nowhere. 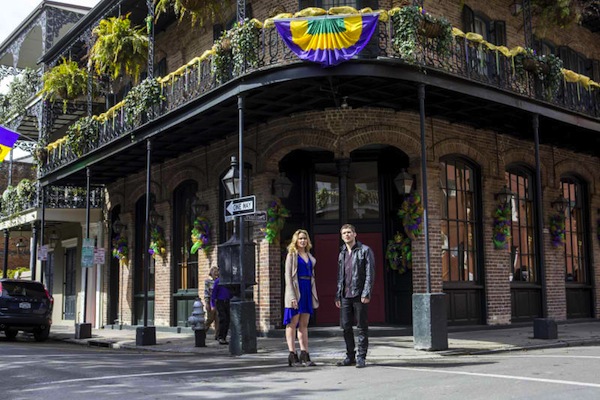 There’s sibling rivalry and then there’s The Originals. Rebekah (Claire Holt) has pushed all the wrong buttons, and Klaus (Joseph Morgan) is out for blood. OK, so he’s usually out for blood, but this time it’s not because he’s hungry. We’ve never seen him this upset. This was one of those amazing episodes where you were so consumed in the action, you didn’t even realize it was almost over until it ended.

This episode was exciting for a whole host of reasons. The first is that we finally see a full flashback of the past when Mikael returned to New Orleans. It was very Abe Lincoln, showdown style. Mikael confronts Klaus at the opera with a white oak stake at Klaus’ chest.

Then we settle into a show that features Marcel nailed to a makeshift cross and Klaus’ werewolf lover staked dead on stage. Remember, this is all thanks to Rebekah’s big plan to get rid of Klaus once and for all. She chose the worst moment to go all vigilante, though, since we also discover it was about the same moment Klaus decided to go domestic and settle into life in New Orleans. Too late. By the time Klaus made the big announcement that he was OK with Rebekah and Marcel’s relationship, the two had already summoned Daddy.

We totally get why Rebekah’s betrayal would send Klaus over the edge. But, we also see why Rebekah wouldn’t want to live with her brother for eternity. Still, we like to think that neither of these extremes would lead us to decide murder is the best option but, hey, we aren’t immortal vampires so we’re OK accepting that we just can’t relate.

Back in the present, Elijah is stuck as the ever constant middle man. Even when it comes to Hayley (Phoebe Tonkin). She wants to break the curse on her family and sees Sabine as the ideal person to help her. Surprisingly, Sabine is all for the spell. She’s, of course, got ulterior motives. It’s all about taunting Elijah for this girl. In her eyes, there is no way Elijah will end up with Hayley if Hayley gets her hands on the potion to break the curse. Sabine thinks Hayley will eventually choose to be with her pack over Elijah, leaving Elijah behind while she develops some spectacular life.

Whether or not Elijah believes it to be true — and it sure seems like he does — he still gives Hayley the potion to cure her family at the next full moon. Hayley thanks him with some really great googly eyes, and the two have the longest almost-kissing moment of the series. Our hearts break a little as she then leaves to wander through the woods with her wolves.

After trapping Elijah and Rebekah together in the graveyard, Sabine decides it’s time to take her leave. She cuts her own throat and dies, which means Davina rises. That’s right, she’s back!

As if we needed more reason to celebrate, Elijah also makes sure Celeste will never rise to torture him again with a little help from Monique. Maybe Sophie’s niece is finally learning the error of her ways. She could, potentially, prove to be a powerful ally to the originals in the future.

On the downside, Klaus comes stalking into the graveyard wildly clutching a white oak stake and ready to take out all his rage on Rebekah.

Do you think Klaus will kill Rebekah? Will Cami or Elijah be the voice of reason?