Lea Michele looks beautiful on the cover of Seventeen magazine and says she only has happy memories of Cory Monteith. The Glee star loved him for always making her feel “so beautiful.” 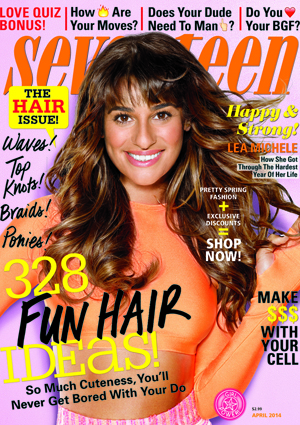 Lea Michele graces the April 2014 cover of Seventeen magazine and revealed how she only keeps “happy memories of Cory” as she recalled how he always made her “feel so beautiful.”

Lea Michele: Cory Monteith was more than his drug overdose >>

After a tough year of tragic loss, Michele is back in a good place, propelled by good memories of her late boyfriend. The actress also revealed how Monteith always kept her happy by making her feel like a “queen every day.

“From the minute he said, ‘I’m your boyfriend,’ I loved every day,” Lea told Seventeen. “And I thank him for being the best boyfriend and making me feel so beautiful.”

Influenced by her experience of losing Monteith after he overdosed on drugs, Michele’s new album contains songs that describe that experience. Originally set to be full of fun pop music, Louder became something entirely different, Michele explained.

“I found myself picking and writing these songs that were very emotional and dramatic,” the 27-year-old continued. “Louder has songs that express extreme love and some pain. I look at it and think, ‘That was my year.’ I didn’t record any songs I didn’t completely relate to.”

Michele also spoke about body image and being confident in her own skin. Coming from Broadway, where “everybody’s naked,” has helped her feel very comfortable in her body, but she won’t be prancing along publicly in the nude anytime soon.

“I like to think of myself as more granola,” Michele admitted. “I’m not going to run around naked or anything like that unless I’m at my own home. Today, I walked into my backyard and was standing out there naked for a while. Don’t tell: my neighbors will freak out!”

Michele’s new album comes out on March 4, and as she put it, she’s going to “March fo(u)rth.”