They both won Oscars on Sunday night, so why are Steve McQueen and John Ridley feuding? Get the inside scoop. 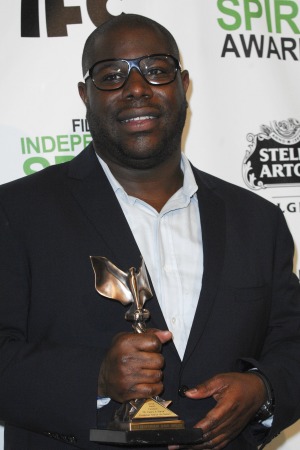 It’s supposed to be a night of celebrating each other’s achievements in film, not throwing each other shade. That’s exactly what happened on Sunday night at the Oscars between two of the men who made 12 Years a Slave a big winner in Hollywood.

Director Steve McQueen and screenwriter John Ridley both won Oscars at the Dolby Theatre on Sunday. McQueen as a producer for Best Picture, and Ridley for Best Adapted Screenplay.

When the writer won his award, it was evident that the director was not as happy as other members of the film’s crew. While many in the audience stood up to honor him, McQueen was seen air-clapping for Ridley and did not throw a glance his way.

In fact, it was American Hustle director David O. Russell who embraced the writer on his way up to the stage. During the acceptance speech, Ridley did not thank McQueen.

It was Hollywood insider Nikki Finke who first broke the news about the feud on Twitter. She wrote, “My sources attributing John Ridley-Steve McQueen cold shoulder at Oscars tonight to dispute over screenplay credit.”

Even though Ridley is the sole author of the film, it is believed that McQueen tried to get a co-writer credit for the screenplay.

Now that they have both won a coveted statuette, perhaps the feud will thaw a bit. Ridley told The New York Post at Vanity Fair‘s party, “Listen, without Steve McQueen I wouldn’t have this Oscar tonight. I owe a lot to the genius of Steve McQueen, and I am forever grateful to have had the chance to work with him.”

It seems like an Oscar will solve all of your problems.