Is Selena Gomez back to her hard-partying ways? Sources spot the young star drinking a bit too much at a post-Oscars event. 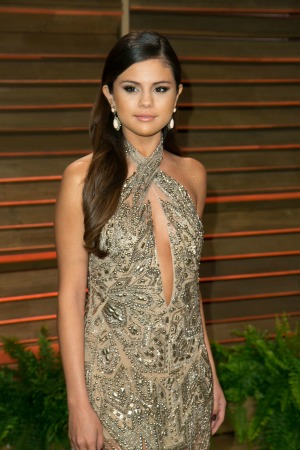 Much has been made of Selena Gomez‘s short stint in rehab. Was it just to recuperate or was it for substance abuse? While the former Disney Channel star’s camp has denied the substance abuse rumor, it seems like the 21-year-old was hitting a post-Oscars party hard.

The Spring Breakers star was seen out at Vanity Fair‘s exclusive event with her BFF, Vanessa Hudgens. According to RadarOnline, the two drank champagne and other alcohol throughout the evening.

The source said, “Selena was drinking constantly throughout the entire party when I saw her. She was having a grand old time and towards the tail end she was stumbling in her heels and almost toppled right over!”

The duo made sure to take lots of selfies during the night and posted them on Gomez’s Instagram account. The “Come and Get It” singer captioned their affectionate photo, “@vanessahudgens my only, official party buddy for life”

“Selena and Vanessa were just having a really good time, laughing and taking pics. She wasn’t slurring too bad, but was definitely in the happy-sleepy stage,” said the insider.

Gomez spent two weeks in an Arizona rehab facility in January to take care of herself, but reports later came out that she was partying hard in the months leading up to the stint.

It doesn’t seem like her partying has slowed down post-rehab.

Professionally, the young star is taking time away from her career to just enjoy herself. She has one project coming out in late 2014 called Behaving Badly with Mary-Louise Parker and Heather Graham. She also postponed the Australia dates of her music tour.

Let’s just hope it was a night out on the town for Gomez and nothing too serious.