Reality couple Teresa and Joe Giudice could be headed to jail after they pled guilty to charges of fraud. And, as an Italian citizen, Joe could face deportation. 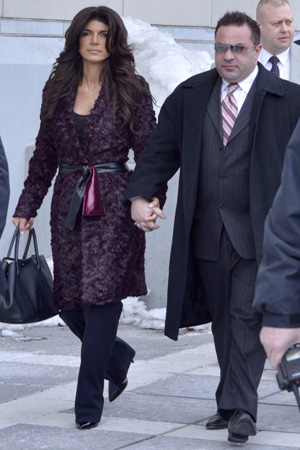 After the couple was asked by U.S. District Judge Esther Salas if they accepted the plea of guilty for their charges they both answered, “Yes, Your Honor.” The pair has been accused of conspiring to commit mail and wire fraud, failing to pay taxes and executing several counts of bankruptcy fraud.

The total of their charges added up to 41 indictment counts. They originally pleaded not guilty after being indicted last summer, but they arranged a plea agreement to possibly lessen their sentences.

According to NBC, Joe is facing 37 to 46 months in prison and could be deported to Italy after serving his sentence because he’s an Italian citizen. Teresa is looking at 21 to 27 months in the slammer, but as a U.S. citizen she won’t face deportation.

“Today, I took responsibility for a series of mistakes I made several years ago. I have said throughout that I respect the legal process and thus I intend to address the court directly at sentencing,” Teresa told the media in a statement before her court appearance. “I will describe the choices I made, continue to take responsibility for my decisions, and express my remorse to Judge Salas and the public.”

Teresa added that she’s heartbroken about how this ordeal is affecting her family, especially her children, but plans on not talking about the case outside of court as advised by her attorneys.

Summing up their charges, the Giudices have been accused of obtaining over $5 million in bank loans using fraudulent means and false information.