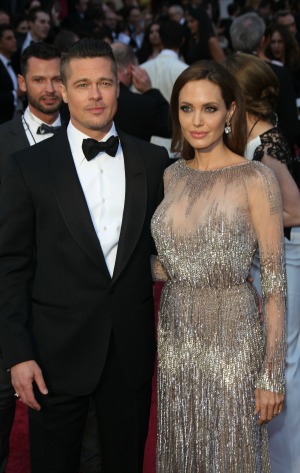 Brad Pitt is one of the biggest movie stars in the world, but he never thought he would take home an Academy Award. The actor won his first Oscar as a producer for Best Picture 12 Years a Slave during this year’s award show.

“I don’t know where I’m going to put it,” Pitt told E! News. “I never thought I’d take one home, so I haven’t thought that far in advance.”

Pitt and fiancée Angelina Jolie aren’t without their awards, though. Jolie has an Oscar from 2000 for her role in Girl, Interrupted. She also took home the Jean Hersholt Humanitarian Award at the Governors Awards in November. Pitt has been nominated numerous times by The Academy, including in 2012 for Moneyball, in 2009 for The Curious Case of Benjamin Button and in 1996 for Twelve Monkeys.

But even though Pitt has been in some important roles, he has never taken home an Oscar.

As producer, the actor gave the acceptance speech when 12 Years a Slave won the award for Best Picture Sunday night, March 2.

“Thank you all,” Pitt said during the speech. “Thank you for this incredible honor you bestowed on our film tonight. I know I speak for everyone standing behind me that it has been an absolute privilege to work on Solomon’s story. And we all get to stand up here tonight because of one man who brought us all together to tell that story. And that is the indomitable Mr. Steve McQueen.”

McQueen returned the favor when he gave his own acceptance speech, saying, “I’d first like to thank the Academy. Thank you so much. There are a lot of people for me to thank, so I’ll just push on. My wonderful cast and crew, Plan B, Brad Pitt, who without him this film would just not have been made.”