SheKnows Editorial, Michelle Carlbert
March 4, 2014 at 9:00am AM EST
Share

Vanessa Lachey opens up about the controversy surrounding the first season of Dads, plus she gives working women ways to make their lives easier. 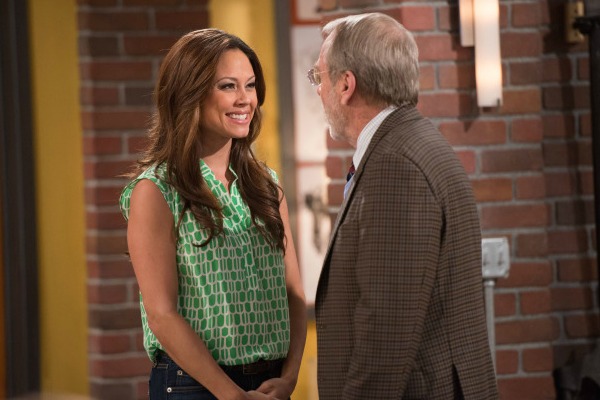 Vanessa Lachey is a working wife and mom, but thanks to a little show called Dads, she’s also had to learn how to live with a controversy. Before it had even aired, the show became known for crass humor and what some were calling racial slurs.

Lachey spoke exclusively with SheKnows about the controversy, saying it was hard for some viewers to give Dads a shot.

“When you hear the word ‘controversy,’ because somebody labels it that, then it’s hard to get out of that hole, you know what I mean? Nothing we’re talking about is directly racist or malicious, it’s just we’re speaking about taboo issues and things that people don’t normally say out loud, maybe,” Lachey said.

Lachey wasn’t completely surprised by the controversy, knowing who she would be working with on the show. “I was surprised at some of the angles [the media has] taken to try and make topical issues, but Seth MacFarlane loves to push the envelope [and] so I knew there was going to be some talk behind it,” Lachey said.

From the first moment she read the script, Lachey knew Dads was a project she wanted to be a part of for many reasons, the most important being that it lets her enjoy the best of both worlds.

“I loved that I was laughing out loud when I was reading it,” Lachey revealed. “[It] also allows me the schedule to be a mom. It’s like a 9 to 5 [job]. We have a stage, we have a dressing room, I have a parking spot. We go in, we have breakfast, we rehearse, we eat lunch, we rehearse, we go home and we have dinner with our families, and I love that. I love that I can balance both because for me family is first and foremost. It’s the best of all worlds. And then I have Nick on the side so it’s like the best of everything.”

While some viewers might think Dads is skewed only toward a male audience, the ladies definitely run the show. Lachey agreed with that assessment, as did one of her co-stars. “Peter Riegert said, ‘You guys are the backbone of this show. As far as you’re concerned, this show is called Moms and you are the glue to this family and the center of this show.'”

Lachey thinks all of the women on the show are strong characters. “I love that we are strong women who like to speak our minds and not get walked all over,” Lachey said, revealing how each of the women was basically in charge, including her character, Camilla. “I’m living with my father-in-law and my husband, but I’m the one who’s running the shots. And at the end of the day, Brenda (Song, who plays Veronica) is working at the company under these two guys, but she’s the one running the company. And Tonita (Castro, who plays Edna) is the queen of the house with Peter (Riegert) and Seth (Green, who plays Eli).

Now that Dads has wrapped its first season and there’s no word yet on a Season 2, Lachey will be going back to a job she loves. “Right now my project is mommy duty. While I absolutely loved [shooting] Dads, but I’ve been looking forward to this time with Camden.”

Part of the life of a working wife and mom is looking for ways to make life easier, and Lachey’s other current project involves helping other women do just that. She has joined a new campaign with Procter & Gamble called Try it & Love it in which she shares the products she uses that help simplify her life.

“It’s basically sharing my favorite products that deliver results, save you time. They’re products that — in lifestyle, beauty and home — get my job done, save me time and get me out the door with my family or doing other things that I love.”

The idea of encouraging people to try the products came from Lachey telling her own friends to try out the things that had worked for her. “I love all of their products and we found this great relationship where I kind of get to do the dirty work and just tell women, ‘Hey ladies, here’s what I do, I hope it helps. I’m convinced that if you try it, you will love it.’ So then we literally came up with this idea of ‘try it, love it.'” Lachey revealed.

The company’s overall message appealed to Lachey. “They get that family is first. They get that people have lives, and you’re a working woman and you’re busy. And whatever it is that is your passion, it’s not staying in and doing the dishes. So they try to make the everyday grind easier,” Lachey said.