He’s trying really hard to get his wife back, but she isn’t budging. Will Robin Thicke reconcile with Paula Patton? 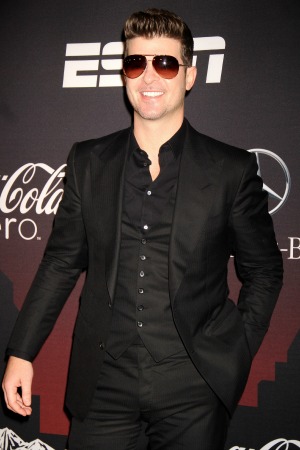 Is Robin Thicke finally seeing the error of his ways? It seems like the singer is desperate to get his wife, Paula Patton, back at any cost.

According to People magazine, the 36-year-old singer continued his wooing campaign while in Atlantic City at the Borgata Hotel Casino and Spa on Sunday night. While talking with the crowd during his concert, an audience member yelled, “I love Paula!”

He responded back, “I do too,” and then launched into the soulful Al Green song “Let’s Stay Together.”

While Patton wasn’t around to hear the song since she was partying it up at Vanity Fair’s Oscar party in Los Angeles, Thicke must have known the press would catch wind of his antics. He’s already paid tribute to her in a concert in Washington, D.C. last Thursday.

Before he sang his 2007 hit “Lost Without U,” he told the crowd, “I want everybody here to know that I’m trying to get my girl back.”

No one really knows if his public pleading is working since the Baggage Claim star has remained mum on the topic. Patton was seen at the Independent Spirit Awards on Saturday and at last night’s Oscar party circuit, but she’s keeping her emotions close to the vest.

The couple, who have been together since high school, married in 2005 and are parents to one son, Julian, age 3-1/2.

Good luck, Robin, you have your work cut out for you!