Justin Bieber and Selena Gomez are no longer in a relationship, but he continues to obsess over her on social media. But at what point are his comments going too far? 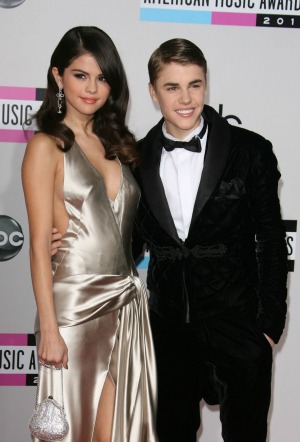 Justin Bieber and Selena Gomez broke up more than a year ago, but it looks like the Biebs just can’t let her go.

Bieber posted a photo on Instagram of his ex at the Vanity Fair Oscar party Sunday night. He captioned the image: “Most elegant princess in the world.”

According to MTV, the couple first confirmed their relationship at the same party back in 2011, which may give even more meaning to the posting of the photo. Back in December, Bieber told a radio station how profoundly the breakup affected every aspect of his life.

“I wrote the best music once my heart was broken,” he said at the time. “‘All That Matters’ was written when I was in a great place in my relationship, and at that time, she was all that mattered in my life.”

Bieber had also said his song “Heartbroken” was written about Gomez, and it helped him relate to his fans.

“It’s a song for people going through heartbreak — like I was when I wrote it,” Bieber said back in October. “It means so much to me to be able to share what I was, and still am, going through with my fans.”

The Biebs is obviously having a hard time getting over Gomez but is posting photos of her taking it too far? Late last year, he said he still hasn’t quite gotten over her.

“[The break up] affected us, especially when we are in front of so many people,” he said back in December. “It’s such a public thing. It’s just hard for the both of us. But you know, she’s a great woman. I love her till this day.”

Gomez also tweeted on Sunday night, but it had nothing to do with Bieber, or any other guy.

She captioned the photo, “@vanessahudgens my only, official party buddy for life ;).”

Justin Bieber turned 20 on Saturday, March 1, and thanked his fans for all their support.

Thanks to everyone for all the birthday wishes. Means a lot. Blessed and hoping we can continue to change the world together. Thanks