Kim Kardashian desperately wants to be an A-list star, but Vanity Fair reminds her that she is just a reality star. 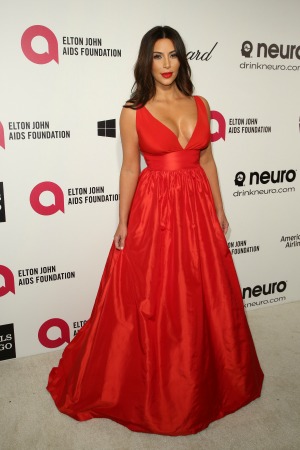 Oscar Sunday is one the biggest nights of the year that ranks the hierarchy for stars in Hollywood. Kim Kardashian was definitely one of those celebrities who was put in her place thanks to the Vanity Fair Oscar party.

While she might be engaged to one of music’s biggest superstars, she’s still a reality star in the eyes of the entertainment industry. According to RadarOnline though, the E! TV personality “desperately wanted to attend” Hollywood’s hottest party of the year.

An insider revealed, “Kim had been hoping to get an invite to the Vanity Fair party.”

When the mom-of-one realized that she was not going to receive that coveted invite, she decided to head to Elton John’s annual AIDS benefit. Kim attended with her mom, Kris Jenner, and sisters Khloé and Kourtney.

Kim’s management sure did try to get her into the Vanity Fair party, though.

The source continued, “It’s the hottest party during the entire award season and Kim desperately wanted to go. Kim’s camp had made inquiries to the Vanity Fair party host Graydon Carter about whether she’d make the list. He never got back to her people! It wasn’t ever going to ever happen.”

The Kardashian clan made the best of the evening and Kim looked gorgeous in her red Celia Kritharioti gown and Lorraine Schwartz jewelry. The 33-year-old just might realize that she needs to be a big A-list star to get on that Vanity Fair invite list.

The insider concluded, “Everyone knows Vanity Fair is strictly A-list only, which means no reality stars. It would have been a circus if Kim along with her mom and sisters went to the party. Graydon would have gotten nothing but grief from actors that didn’t get an invite!”