In a recent episode of The Walking Dead, Daryl and Beth seemed to be growing much closer. Could this mean that the two of them are heading for romance? 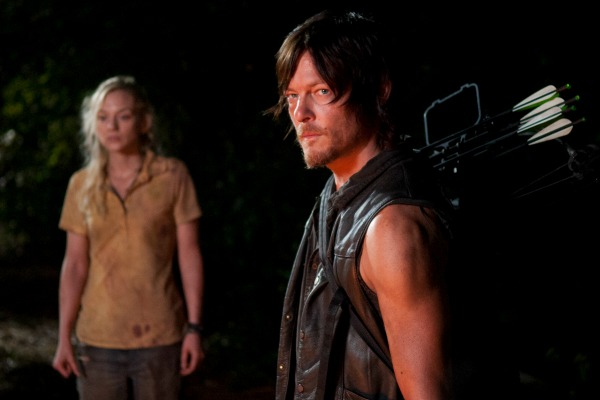 When you’re living in a zombie apocalypse, the normal rules of dating kind of fall out the window — two people can go on a run for supplies at a drugstore, find some condoms and poof! They’re a couple. Glenn and Maggie’s relationship may have started in a drugstore, but now there’s no doubt that the two of them were always meant to be and many fans are keeping their fingers crossed that they find each other again.

In a recent episode of The Walking Dead, “Still,” it looked like the show might be setting up a new couple — Daryl (Norman Reedus) and Beth (Emily Kinney).

The two survivors have never had a lot to do with each other before now. There were a few moments here and there when they spoke to each other and Daryl was the one that told Beth her latest boyfriend had become zombie fodder, but it’s not like there was ever any connection between them.

But when the Governor came to the prison with his tank and began killing everyone in sight, including Beth and Maggie’s father Hershel, people had to run for their lives. The escape left nearly everyone paired off or grouped with people they had never really had a lot of contact with before. So suddenly, Daryl and Beth found themselves on the run together and have been trying to make the best of it.

Right away, it was clear that Daryl and Beth were each dealing with the attack on the prison in different ways. Daryl seemed to nearly shut down, while Beth seemed to open up more than ever before. She made it her mission to track down some alcohol so that she could have her first drink, but wasn’t happy when she finally found it. Daryl wanted nothing to do with her ridiculous plan, but soon gave in and even found some booze he felt might be worthy of her first bender.

Beth found out the hard way that Daryl was a jerk when he drank, but she never backed down from him and was able to break through his rock-solid barrier to find out how he was really feeling about everything. Turned out Daryl blamed himself for all the people they think they’ve lost. He also revealed what he used to do before the walkers came — absolutely nothing. The zombie apocalypse actually gave Daryl a reason for living and a job to do and he was heartbroken that he apparently failed at it.

A Glenn and Daryl romance? Secrets from The Walking Dead >>

Beth also opened up about her feelings and why she sang when asked and took on jobs such as babysitting Judith. She too was looking for meaning in her new life and was willing to do whatever she could to help the group survive, even if that meant changing diapers.

After such an incredibly strong bonding moment, it would appear that the next step for these two would be to get romantically involved with each other. On the one hand, their recent adventures show that it could possibly work between them. But on the other hand, there are many reasons it could not work at all.

First of all, many fans have had their hearts set on Daryl and Carol getting together for a very long time. Daryl and Carol have a very strong bond, too and theirs didn’t just happen overnight. It’s one that was built slowly over time. Plus, there’s the age difference between Daryl and Beth. She may have just declared herself an adult, but she’s still a very young girl.

What do you think? Should Daryl and Beth get together on The Walking Dead?