The fashion line started by Katie Holmes is no more, and a damning deposition in a Tom Cruise lawsuit may be to blame. 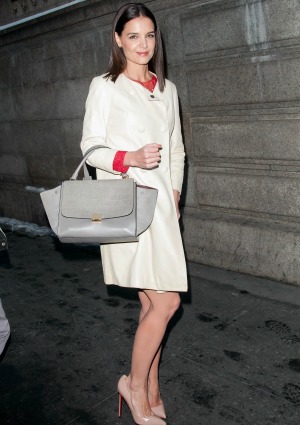 Five years after launching her first fashion line Holmes & Yang, actress Katie Holmes is experiencing her biggest breakup since the collapse of her marriage to Tom Cruise.

The critically lauded fashion partnership is no more, the star’s rep confirmed. “The Holmes & Yang partnership has ended.”

While neither Holmes nor Yang has commented further on the broken line, sources say that Yang’s willingness to cash in on her famous friend’s name — and spilling secrets to the press in the wake of Holmes’ split from Tom Cruise — led to the business’s downfall.

“Jeanne enjoys the spotlight way more than Katie does,” a source told Page Six.com. “Things have definitely soured between them.

Adding to the business partnership’s downfall were accusations by Tom Cruise’s rep that Yang was feeding private family information to the media during the couple’s split, including details of a trip Cruise took to Disney World with their daughter Suri that resulted in the headline, “Forgetting Mommy already?”

In a series of emails leaked during his lawsuit against a magazine that accused Cruise of abandoning Suri in the months after his split from Holmes, the actor’s camp made it clear they believed Yang to be the leak.

“She likely told the press that [Tom and Suri] stayed at Cinderella’s castle as no one really knew,” one email between people in Cruise’s camp read. “And every single person tells me she is speaking to the press constantly. She is the one saying — K is disciplinarian and T is spoiling and so on.”

No word yet on whether or not Holmes plans to stay in the fashion biz solo.

What does the Foxx say about dating Katie Holmes?
Katie Holmes’ Allure cover: She opens up on the inside
Katie Holmes: Dating, but Tom Cruise left emotional scars