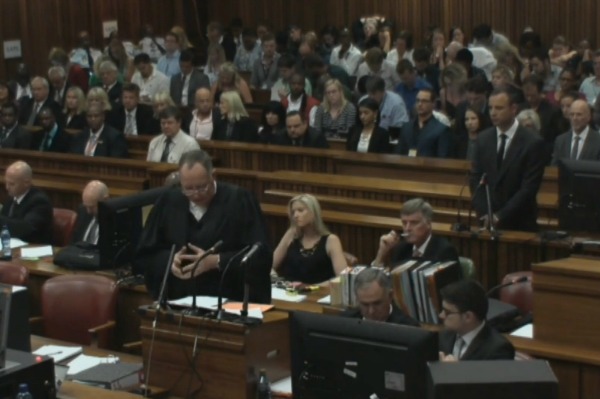 The Oscar Pistorius murder trial began its first day with terse testimony from a neighbor who said she heard screaming before and after shots rang out from the athlete’s home.

Michelle Burger, who lives nearby Pistorius in the same upscale gated community in Pretoria, South Africa, told prosecutors that a woman’s screams, followed by gunshots and then a man’s screams, woke her in the early morning hours of Feb. 14, 2013.

Is the prosecution already falling apart in the Oscar Pistorius murder case? >>

“Just after 3, I woke up from a woman’s terrible screams,” she said. “Then I also heard a man screaming for help. Three times he yelled for help.”

“It was very traumatic,” Burger continued. “You could hear it was blood-curdling screams. You can’t translate it into words. The anxiousness in her voice, and fear. It leaves you cold.”

Upon cross-examination, Pistorius’ defense attorney suggested it was the athlete Burger heard screaming the entire time, but she rejected that notion and Pistorius’ own assertion that he heard no screaming himself.

“I can only tell the court what I heard that evening,” Burger said. “I cannot understand how I could clearly hear a woman scream but Mr. Pistorius could not hear it.”

The Olympian, who pleaded not guilty at the start of the proceedings, maintains that he shot Steenkamp through the bathroom door, thinking an intruder was about to attack.

In a statement to the court that was read by his attorney, Pistorius explained there were no burglar bars across the bathroom window and that contractors had left a ladder resting against the wall outside. He claims he left Steenkamp in bed while he retrieved a fan from the patio, and when he came back inside he heard noises in the bathroom. Assuming Steenkamp was still in bed, he feared the worst.

“It filled me with horror and fear of an intruder or intruders being inside the toilet,” he said in a statement. “I thought he or they must have entered through the unprotected window. As I did not have my prosthetic legs on and felt extremely vulnerable, I knew I had to protect Reeva and myself. I believed that when the intruder/s came out of the toilet we would be in grave danger. I felt trapped as my bedroom door was locked and I have limited mobility on my stumps.”

“I believed that someone had entered my house. I was too scared to switch a light on,” he explained. “I grabbed my 9mm pistol from underneath my bed. On my way to the bathroom I screamed words to the effect for him/them to get out of my house and for Reeva to phone the police. It was pitch dark in the bedroom and I thought Reeva was in bed.”

South Africa has an extremely high violent crime rate and home invasions as described by Pistorius are commonplace.

If convicted, Pistorius faces at least 25 years in prison plus additional jail time for various gun charges he is facing.

The trial will resume on Tuesday.