Jared Leto and Lupita Nyong’o have been making the headlines about a possible romance, and the actor has even mentioned the Kenyan actress in an award acceptance speech. What’s really going on? 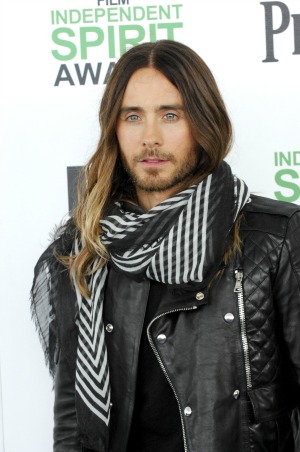 As much as we wish that the rumors of romance between Jared Leto and Lupita Nyong’o were true, it seems as though this is one Hollywood couple we’ll just have to wish would happen.

The actor and the beautiful Kenyan star have been making headlines about their potential romance for the past few weeks.

The pair first sparked rumors of a romance when they were spotted getting cozy at the Golden Globe Awards in Los Angeles, California, in January. But the rumors continued when they were once again seen flirting together in February at the Crosby Street Hotel in New York City, New York.

A source revealed to the New York Post‘s Page Six at the time that the pair “were huddled at a corner table together looking very close.”

And clearly Leto and Nyong’o have been reading the headlines because the Chapter 27 star decided it was finally time to address them after winning an Independent Spirit Award in Santa Monica, California, on Saturday for his role in Dallas Buyers Club.

According to Page Six, Leto jokingly ended his acceptance speech by thanking his “future ex-wife” Nyong’o.

“In case this is the last time I get to thank anyone, I wrote down a couple of names,” joked Leto.

“I want to thank all the women I have slept with and those who think they’ve slept with me,” the 30 Seconds to Mars singer cheekily said. “And [to] my future ex-wife Lupita!”

The remark created a massive grin on Nyong’o’s face, but it appears Leto’s joke was a way of telling the world that their romance is not happening although they may be enjoying a few more headlines about it for just a little longer.

The 12 Years a Slave star has also joked about her supposed romance with Leto, previously telling Ellen DeGeneres during an appearance on Degeneres’ talk show, “Ah, but I thought Miley Cyrus broke us up. That was the last thing I heard.”

Nyong’o added, “It’s crazy… when I read these rumors, they’re so detailed that even I start to question whether they’re true or not. I know I’ve believed them in the past and now I guess I can’t believe anything.”