The 86th Academy Awards ceremony turned into a celebrity pizza party, thanks to host Ellen DeGeneres. So did the lucky pizza guy score a well-deserved tip? 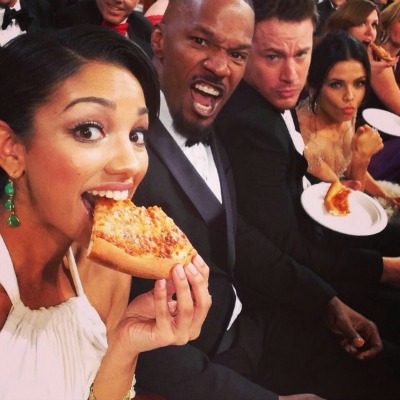 The 86th Academy Awards ceremony was filled with surprises and even pizza! Funny woman and Oscar host Ellen DeGeneres arranged for a real pizza delivery guy to feed the hungry A-listers at the Dolby Theatre on Sunset Boulevard on Sunday night with some delicious pizza from Big Mama’s & Papa’s Pizzeria.

DeGeneres proved to the world that the Oscars can be a fun and informal affair, and she managed to get plenty of laughs from not only the crowd present at the lavish affair but also from those of us who were eagerly watching at home.

We may not know his name, but one lucky pizza guy got to serve slices to the stars, including Jared Leto, Angelina Jolie and Lupita Nyong’o. And Degeneres called upon film producer Harvey Weinstein to pay the tip. Now, the question on everyone’s mind is did the pizza guy score big time?

According to Reuters, DeGeneres addressed the crowd by asking, “Where’s Harvey Weinstein?” Upon locating him, she ensured him it was his responsibility to pay the tip, adding, “No pressure, only a billion people are watching, whatever you feel is right.”

We certainly hope the pizza guy, who seemed slightly terrified during the experience, was tipped generously. There was even rapper Pharrell Williams’ famous hat going around to gather cash from the stars, which, according to TMZ, managed to gather about $300 for the lucky deliveryman.

According to TMZ, the unnamed delivery guy also received a hero’s welcome when he returned to the Big Mama’s & Papa’s Pizzeria restaurant, which is located in a Los Angeles, California, strip mall. He was apparently greeted with cheers and high-fives from his envious yet congratulatory co-workers.

Now that we’ve seen what a celebrity pizza party looks like, what could possibly happen at the next Oscars?