I mean, isn’t it inevitable for the latest fads to be infused into music? But, selfies? Exponentially growing in popularity, you may want to shield all your friends named Jason from this strange concoction. 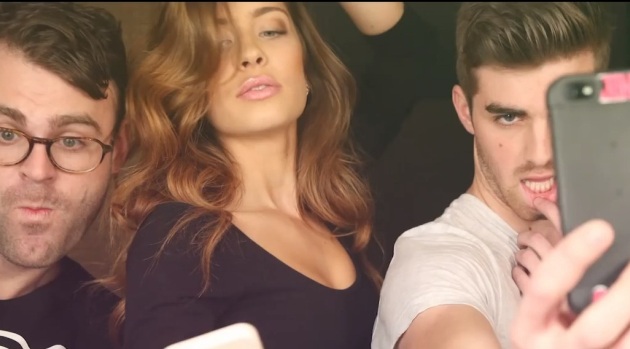 What’s the worst song you ever heard?

To some, it may have been as simple as Rebecca Black’s “Friday.” To others, it could be Pharrell’s “Happy.”

But, if you notice, being terrible doesn’t mean it can’t be popular. Ranking a track as “worst” is as vague as Robin Thicke is on his separation from Paula Patton.

Where do they stand right now? Read our scoop on the situation >>

So, the answer to the question from the title of this review?

“#Selfie” by The Chainsmokers is not the worst song ever created. In fact, it may be terribly brilliant.

Don’t get left behind with what’s buzzing in music. Sign up for our newsletter >>

It’s a standard club track with what my mom likes to call “thumps and bumps,” but it’s the dialogue that wants you to rip your earphones (and perhaps your ears) from your head.

It mocks the frequent bathroom discussion girls have while out indulging in nightlife. A poor “Jason” is the focus of one gorgeous and confusing character. She sounds so idiotic, but her logic is even more so. Even if it’s not numbing to you, it’ll definitely be humbling because even I can say I’ve said something of the things they say. But you have to listen to the full dialogue to really appreciate the depth of such a superficial, comedic song.

Is it possible selfies only exist to make people want you?

I dare not get into that issue, instead, I want to promote this embarrassingly addictive gem, which involves the world’s most dangerous combination: two girls in a bathroom armed with selfies.

With an astonishing 2,588,998 views (and counting), I would say this band is snapping up attention, whether good or bad, for this hilarious hit. And if you need any more incentive, the band is adorably grateful for the overwhelming response. Just a week ago, they gushed their gratitude in the comments section. Oh, and just a week ago, they were at 1,000,000 views. I’m hardly a mathematician, but you may have to be a magician to have doubled that in seven days. Impressive, huh?

If you are not impressed, I understand. ‘Cause you want to know my first reaction? “What has this generation come to?” But it grew on me. Maybe it will for you too!

Did Shakira get “voice” surgery? No, but she sounds different in “Empire”
Bizarre or brilliant? St. Vincent’s “Rattlesnake”
JoJo is reborn with “Glory”