Mary-Kate Olsen is engaged to marry her boyfriend of two years, Olivier Sarkozy. The father of two and the young actress/fashion designer are headed for their own “full house.” 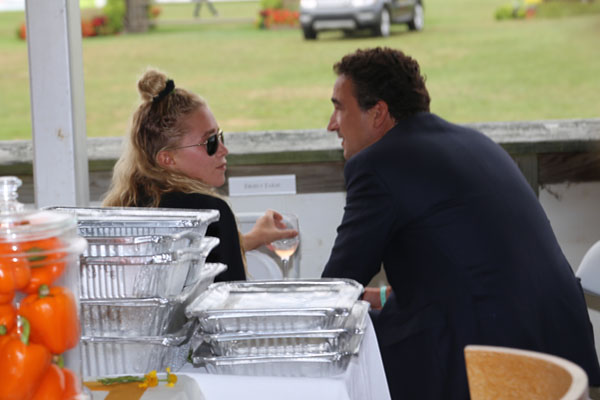 After two years together, Olivier Sarkozy and Mary-Kate Olsen are engaged to be married and set to make their own full house together.

Several sources confirmed to Us Weekly that Sarkozy, 44, proposed to his 27-year-old girlfriend, Olsen, after they had been dating for almost two years. Sarkozy, who is the half-brother of former French president Nicolas Sarkozy, and Olsen surprised fans when they first stepped out together in 2012.

The odd pair have since been spotted getting cozy at several basketball games in New York City, where they share a luxury townhouse together.

Despite their 17-year age difference, Olsen and Sarkozy get along fantastically, and their respective families couldn’t be happier for the couple. “Mary-Kate’s family thinks Olivier is the best thing to happen to her. They love him,” an insider told Us.

Sarkozy was previously married to Charlotte Bernard and has two children, Julien, 12, and Margo, 10, to whom Olsen has taken to very easily.

“Mary-Kate has made [Sarkozy] a better father,” another source previously told the magazine. “She remembers all the kids’ special events. She thinks he’s a great dad.”

Elizabeth Olsen has a favorite sister, and it’s not Mary-Kate >>

It seems Sarkozy may have done the actual proposing during a recent vacation he took with Olsen in Jamaica earlier this month. Olsen’s younger sister, Elizabeth, told Andy Cohen on Watch What Happens Live that her older sibling forgot her birthday while she was away. It seems now she may have had a good reason for her slip.

Meanwhile, Olsen’s other sister, her twin Ashley, is also happily involved with an older man. After breaking up with David Schulte, Ashley began dating Moneyball director Bennett Miller, who is 47.