Troian Bellisario is finally engaged to her beau Patrick J. Adams! But have the couple been keeping a secret for longer than anyone expected? 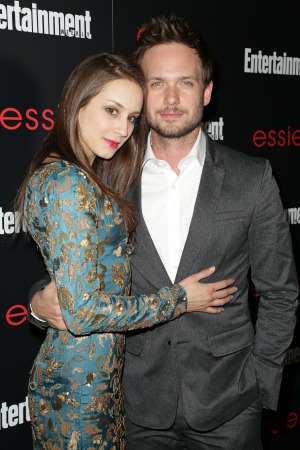 There’s good news for Pretty Little Liars star Troian Bellisario because according to Us Weekly, she has finally gotten engaged to her beau of three years, Suits actor Patrick J. Adams!

However, there had been rumors of a possible engagement since Valentine’s Day, when the beauty shared a picture on Instagram of herself and her man enjoying a very romantic date on top of the Eiffel Tower.

Bellisario wrote a telling caption that said, “Last night was very unexpected. In the best way.”

Pretty Little Liars review: The child-proof lid is off for Spencer >>

Adams also decided to share a picture of himself and his lady on Valentine’s Day, captioning it, “Hey Paris, don’t wait up. We’ll be out late.”

However, the pair are thought to have been engaged long before Valentine’s Day. A source revealed to Us Weekly, “They got engaged in early January and have been keeping it a secret. She’s been hiding her ring in the press.

Well, fans were lucky enough to get a glimpse of the ring in question on Wednesday at the H&M show during Paris Fashion Week, when the actress showed off her pretty bauble for the first time.

According to the New York Daily News, the smitten pair met when they were working on the play Equivocation together in 2009. Over the years, their romance blossomed, and the pair have never let their work commitments become an issue. Bellisario previously revealed to People magazine, “It’s constant coordinating. It’s really hard to be away from the person you love, especially when they’re your rock and support system.

“It’s a challenge but it’s kind of perfect because we’re such analytic, hyper-intelligent people that sometimes just to be in each other’s faces all the time might have been too much for us,” she added. “We’re really growing!