Robin Thicke and Paula Patton have not been having a good week. First, the couple announce they are splitting up, and then their only son is involved in a minor car accident. Could things get worse? 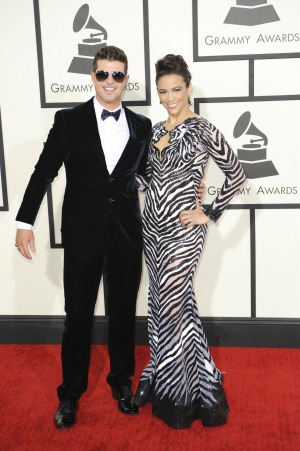 Things aren’t going well in Paula Patton and Robin Thicke’s life right now, and their bad luck turned worse when their only son was involved in a car accident just three days after the couple announced they were separating.

According to Entertainment Tonight, the couple’s son Julian, 3, was with the 2 Guns actress’ mother Joyce Patton and an assistant during the time of the incident, which happened on Sunset Boulevard in Los Angeles, California, on Thursday. The trio had been driving in a black Range Rover and were being followed by paparazzi.

The incident is said to have been minor, and luckily no one is believed to have been injured, although no further details have yet been confirmed.

However, the couple could certainly do without anymore stress in their lives at this time. They revealed earlier this week that they are separating after nearly nine years of marriage.

The couple released a joint statement to People magazine on Monday, saying, “We will always love each other and be best friends, however, we have mutually decided to separate at this time.”

And it appears the beauty is the one who wants to call time on her relationship with the “Blurred Lines” hit maker. But Thicke is not ready to give up on his wife or his marriage just yet.

According to a source at Us Weekly, the singer really doesn’t want a divorce. The source revealed, “Robin wanted to save their marriage, but it was Paula’s choice and she ended it. Robin does not want this divorce.”

These claims were confirmed when Thicke revealed on Thursday in Washington, D.C., to TMZ cameras that he is “trying to get her back.” The star really is trying, and according to the Daily Mail, Thicke reiterated his point when he dedicated his song “Lost Without U” — a song he admitted to have written about Paula — during his Fairfax, Virginia, concert on Thursday evening.

Thicke said, “For y’all that don’t know me and my wife separated, but I’m trying to get my girl back. She’s a good woman.”

Let’s hope that the couple manage to work out their differences and that the separation does not end in even more heartbreak.