Robin Thicke is not giving up on his marriage to Paula Patton and claims he’s trying to get her back. 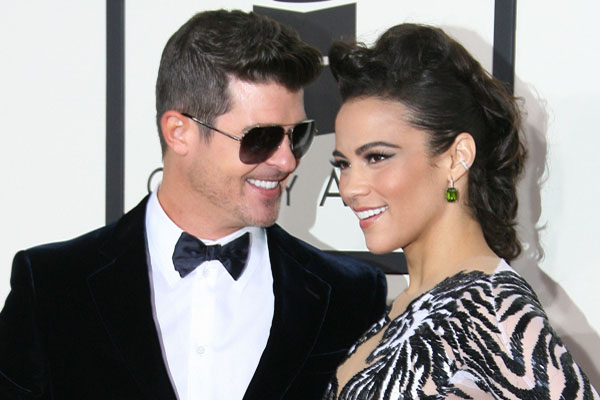 Paula Patton may have had enough of Robin Thicke and his alleged hookups, but the singer is not giving up and claims he is trying to get his wife back.

He may have flown to Vancouver, British Columbia, for a failed attempt to save his marriage, but Thicke is not done giving up on his wife and said he wants her back. TMZ cameras caught up with the R&B crooner at the airport in Virginia, where the entertainer was asked about his separation from Patton.

Incidentally, Thicke also told the website that the split from his wife had nothing to do with his infamous MTV VMAs super-raunchy performance with Miley Cyrus a few months ago. However, several reports have stated that Patton “went ballistic” after Thicke’s twerking antics with Cyrus and felt “utterly disrespected,” sources in the know told TMZ.

“The Miley Cyrus fiasco was a big test of their relationship,” another insider told Us Weekly. “He asked her to help him out as a friend and a wife, and defend him and the performance.” But she did it as a favor and apparently did not forgive him for his actions.

Thicke canceled several shows after Patton told him on Friday she was done with the marriage. The singer flew to Vancouver, where Patton is filming her new film Warcraft, to plead with her. Unfortunately, she would not relent, and the pair announced their separation on Monday.

But while Patton seems set on ending the relationship, the “Blurred Lines” singer will not give up. He’s bent on getting her back and is not done with his efforts to persuade her to change her mind. Meanwhile, Thicke is back on tour and promises his concert will stay the same, even though many songs on the show are about his estranged wife.