On the bright side of The Vampire Diaries, at least Damon’s craving for vampire blood inadvertently led to Stefan and Caroline learning the truth about Katherine. 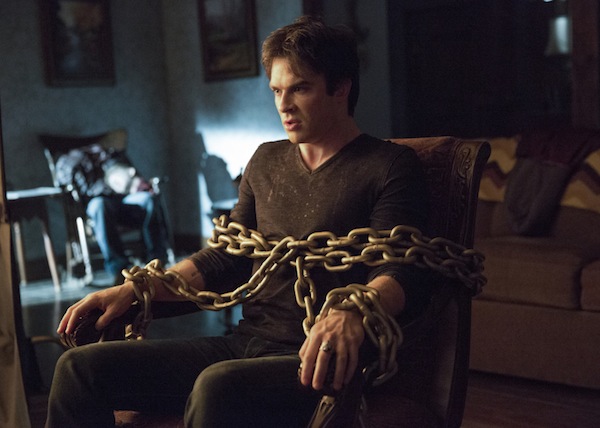 This week’s episode of The Vampire Diaries was solid, as expected, but mainly served as a stepping stone to make us salivate for next week’s episode. Thankfully, finally, let’s all jump for joy. Stefan (Paul Wesley) and Caroline (Candice Accola) came to the realization that Katherine was posing as Elena (Nina Dobrev) thanks to her all too obvious attempts to have Damon (Ian Somerhalder) killed tonight.

Let’s start by talking about Katherine, who might as well be flinging herself at Stefan every chance she gets. Stefan is focused on finding Damon, but Katherine is focused on making things happen with the so-called love of her life. She damages his car, springs for a hotel and even leaves the bathroom door open so he’ll catch her naked while changing. Finally, because he’s not making the moves quick enough, she plants a wet one on him, which he quickly stops. Remember, he’s got saving Damon on the brain.

In her desperation, Katherine decides Damon should die. Because he now craves vampire blood, if she can get him to feed on her, in her mind, Stefan will have to kill his brother. Luckily, Stefan is smarter than that and finds a way to save Damon without stabbing him in the chest with the stake Katherine all but flat out tells him to use.

As if Katherine throwing herself at Stefan wasn’t an obvious enough sign that Elena is not Elena, Matt finally finds a way to alert the gang before Nadia compels him. Again. After a few card games and some long heart to hearts while they wait for the vervain to drain from his system, Matt also plays the kiss card as an attempt to distract Nadia. It works, well enough for him to get a text to Caroline that reads, “Help. K,” but Nadia catches him in the act before he can finish the rest of the text.

Paired with the other clues, it’s all the evidence Caroline and Stefan need. During a routine bonding sesh together, the two are able to put the pieces of the Katherine puzzle together. (Just try to tell us these two aren’t going to eventually get together. I mean, come on!) Secret’s out! Now, how do they plan on saving Elena exactly? We’re guessing it will require some help from Bonnie and her “other side” abilities.

At the end of this episode, The Vampire Diaries paid tribute to crew member Sarah Jones, who was tragically killed in a train accident last week.