We love her as Lady Mary Crawley on the addictive TV show Downton Abbey. Her latest role takes her into the unfriendly skies of the 21st century. We sat down with the actress to find out more about making this action-packed thriller. 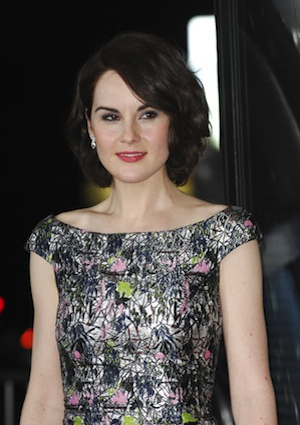 While in the air, Marks receives a series of text messages from an anonymous sender who threatens to kill someone on board the airplane every 20 minutes unless a large sum of money is transferred into his bank account. When the killer makes it seem as if the air marshal is hijacking the plane, the situation goes from bad to worse.

Dockery plays Nancy, a flight attendant who struggles to keep the passengers calm during the deadly chaos. We asked Dockery about her thoughts on flying. “I really love flying, being away from everything, switching off, time to not check emails, sit back and watch films and read,” she said.

When we asked her about filming inside a plane on set, she said, “It was weird, but it was very amazing. Everyone held it together.” So we guess we can assume that the prop barf bags didn’t need replacing.

The actress claims to be good at dealing with stress in real life, emphasizing that she can, “Hold it together.”

She particularly enjoyed working with Julianne Moore, who plays Jen Summers, a passenger aboard the plane. “Julianne was a Downton Abbey fan, so she wanted all the spoilers.” Well, so do we!

Dockery also said the cast was, “Like family. It was a lot of fun to work with them.” Non-Stop opens in theaters today.

Are you going to support Michelle Dockery and go see Non-Stop? Tell us in the comments section below.