Katy Perry isn’t about to let a little thing like being associated with blasphemy ruin one of her best days ever. Find out why the songstress was glowing with happiness as her “Dark Horse” video got reworked. 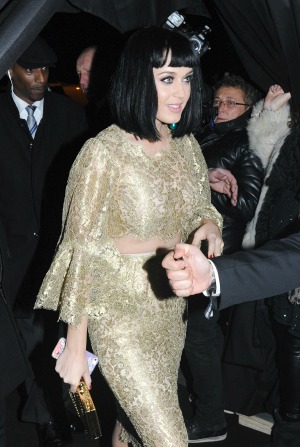 Katy Perry’s video for her song “Dark Horse” has been washed of elements some viewers found offensive. It appears that more than 65,000 people who signed a Change.org petition to have the video edited have gotten their wish!

“The video is considered as highly controversial to its viewers as a result of its portrayal of blasphemy,” a note explaining the petition’s mission read.

“At 01:15 into the video ‘Dark Horse’ a man is shown being burned, whilst wearing a pendant (also burned) forming the word ‘Allah’, which is the arabic word for God.”

Explaining that using “the name of God in an irrelevant and distasteful manner [that] would be considered inappropriate by any religion,” the petition called for YouTube to remove the “Dark Horse” video from its website.

Though that hasn’t happened, MTV reports the pendant in question has been altered in the video. Take a look and see if you can spot anything curious around the 1:15 mark.

Despite the Change.org users celebrating what appears to be a victory, neither Perry nor anyone from her team has commented on the “Dark Horse” video editing.

Coincidentally, the singer was celebrating something of an entirely different nature as word of the pendant problem made headlines. Check out the sweet message the unlucky-in-love beauty posted to announce a baby’s arrival:

Although the identity of the woman hasn’t been confirmed, it’s believed it was Katy Perry’s sister Angela Hudson, who was in labor in the living room!