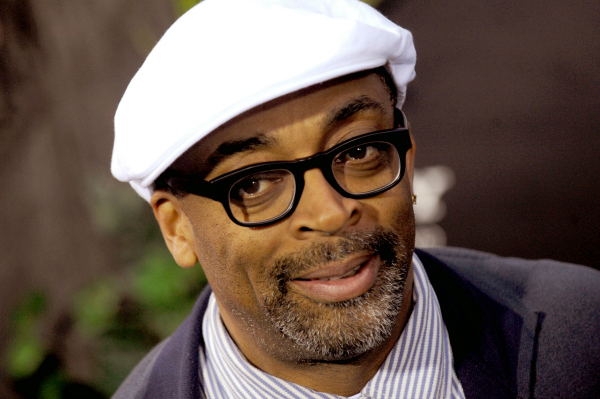 It started with an innocent enough question. An audience member asked Spike Lee if he had ever considered “the other side” of gentrification. “Let me just kill you right now,” the film director, most famous for 1992’s Malcolm X, interjected, “because there was some bulls*** article in the New York Times saying ‘the good of gentrification.'”

It’s a sensitive subject for Lee, who grew up in the Fort Greene area of Brooklyn and still keeps an office there (his parents still live in the area, too). “I grew up here in New York. It’s changed,” he said.

Among his profanity-filled complaints about gentrification in Brooklyn were the facts that Fort Greene Park in the morning was “like the motherf****** Westminster Dog Show” and that long-time renters “can’t even afford f****** motherf****** Williamsburg now because of motherf****** hipsters.”

“And why does it take an influx of white New Yorkers in the South Bronx, in Harlem, in Bed Stuy, in Crown Heights for the facilities to get better? The garbage wasn’t picked up every motherf***** day when I was living in 165 Washington Park,” he railed on. “The police weren’t around. When you see white mothers pushing their babies in strollers, three o’clock in the morning on 125th Street, that must tell you something.”

What exactly does it tell you, though?

Thirty-year-old Faith Donaldson grew up in neighboring Clinton Hill and is now raising her daughters in the very brownstone her parents raised her in. Although she routinely receives offers to sell her home for upwards of $1 million, Donaldson is staying put. The New York native told the New York Times that the gentrification Lee admonishes has contributed to positive changes in the area, such as a lower crime rate, less drugs on the street and a better school system for her kids.

Sharon Graves, 65, who has been in Fort Greene for three decades, told the Times that she used to only walk her dog in large groups because “it was like a war-torn zone.”

As a 30-year-old white woman with two children under three who also lives in a historic neighborhood in the midst of revitalization, I would argue that women such as myself and Donaldson are mothers first and foremost, and we want the same thing — a safe place to raise our children.

“The things that low-income people think are nice are the same as what wealthy people want,” Nancy Biberman, director of the Women’s Housing and Economic Development Corporation in the Bronx, told New York Magazine.

The real problem with gentrification, former New York Governor David Paterson told the Huffington Post, is the fact that the people who’ve lived in these neighborhoods for so long can no longer afford to live in them.

That I get. In the short time since my family and I moved into our current condo — a brief stop, so we thought, on the way to buying a home in this “transitional” neighborhood — the fabric of the area has already begun to change, and we are in danger of being priced out (lack of sufficient income is not exclusive to any one race or demographic).

In Lee’s old neighborhood of Fort Greene, longtime residents are barraged daily with offers from real estate professionals about selling their homes for seven-figure sums.

For D.K. Smith — the managing director of the Brooklyn Innovation Center who asked the question that sparked Lee’s tirade — such potential profits (most longtime residents of Fort Greene bought their brownstones for anywhere between $40,000 and $70,000) are an exciting side effect of gentrification.

“For the first time, tens of thousands, if not hundreds of thousands, of blacks can participate in the American wealth creation,” he later told CNN. “My God, that’s what this country is all about.”

While Smith did agree with Lee that he didn’t understand why an influx of white New Yorkers was the predicating factor for change in the area, he told CNN the issue was bigger than race. “I’m black, and America is America,” he said. “I don’t need to moan and groan about it all the time. And some things are bigger than Bed Stuy or Fort Greene or being black in Brooklyn. Gentrification is an issue everywhere. It gets right down to the whole economic scene with the super rich, the 1 percent and then the other 99 percent of us.”

In the very New York Magazine article Lee espouses as bulls***, one local takes a surprisingly novel approach to gentrification: adapt. Manny Ramirez, owner of Dichter Pharmacy and a lifelong resident of the area, has decided to take advantage of the area changes. “If you’re listening, however the neighborhood changes, that’s how you stay in business,” he told the magazine.

It is how the poor are “confined to islands of deprivation, encircled by oceans of prosperity,” as described in the article, that Lee takes issue with. However, the magazine contends those “Dickensian juxtapositions” actually just prove that the city’s subsidized housing program is doing what it should — keeping the city from becoming completely gentrified by preserving historic neighborhoods and, thereby, diversity.

Just as I want to raise my children in a safe neighborhood, I want to raise them in a neighborhood that is rich in culture and diversity. I don’t want a color to be the first descriptor out of my child’s mouth when he or she is asked what someone looks like.

I love the rhythmic thumps that stream out of the timeworn, black biker bar at the end of my block every night — it is part of the inner-city lullaby I drift off to sleep to. And I also love the frothy gourmet drinks from the new “yuppy” artisanal coffee shop around the corner.

So my question is this: Won’t race lines and socio-economic lines always exist if we continue to draw them? Is it naïve to believe that we can, in fact, all get along?

Do you share Lee’s view of gentrification? Share your opinion via comment, but keep it classy. We want to open a smart, balanced dialogue on the subject. Please refrain from hateful remarks of any kind.