To celebrate the release of The Hunger Games: Catching Fire on DVD, we sat down with Willow Shields, who plays Katniss’ younger sister Primrose. Find out what this 13-year-old actress had to say about working with Jennifer Lawrence and preparing for her difficult scenes in the upcoming Mockingjay movies. 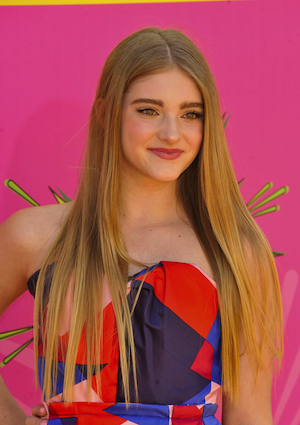 After two movies and all the hype, there isn’t a teenager alive in America who hasn’t heard of The Hunger Games. So we wanted to know if Willow Shields knew what she was getting herself into before she auditioned for Primrose.

“My brother had read the books already and he really loved them. I finished the first book right before I got the audition,” said the soft-spoken actress, who also revealed which scene she was asked to perform in the audition.

“It was the scene from the first movie where Katniss has volunteered herself as a tribute and she has to say goodbye to her family. It was extremely emotional, but it was a fun scene because I got to show a lot of different emotions.”

Shields said having a sister in real life helped a lot when she had to get into character. “It made what Prim was going through more relatable. At this point, though, I have such a strong bond and connection with Jen, it really comes naturally.”

OK, so we’re all dying to know: What is it like working with Oscar-winner Jennifer Lawrence? “Jen is crazy!” Shields said, adding, “She’s so much fun on set. Everyone loves her and she’s still the exact same person she was when we first started filming. She’s handled her fame amazingly. She’s the most fun, down-to-earth person —basically, she’s the life of the party on set.”

Did Lawrence give the young actress any career advice? “Yes,” said Shields, “She said to always stay who I am through all of this, don’t change. This is a large chunk of my life, from 10 years old onward, and I remember that advice every day.”

One thing unique about Shields’ career is that most film actors don’t get to play the same character over four movies. We asked Shields what seeing herself grow up on-screen is like.

“I think it’s kind of funny actually, because I can watch the first movie and think, ‘I’m so tiny and young!’ but then also keep watching to see how much I’ve grown as a person and an actor. It’s really fun. To play the same character over four movies, you learn more and more about that character.”

Those of us who’ve read the Mockingjay book know Prim’s fate. We asked Shields how she’s preparing for the upcoming movie. The first thing she did was re-read all the books. But she admits there isn’t going to be a lot of preparation going into it, “because we’ve all become so close, it comes so naturally to all of us. It just comes a little easier now. I mean, I’m growing up with Prim and a lot of the stuff is relatable to me.”

When she’s not acting, the New Mexico resident claims she likes to dance but is also a total bookworm. “I read books all the time. My favorite author is John Green. I love The Fault in our Stars and Looking for Alaska.”

When it comes to music, she admits she’s more into the alternative side. “I really like Lorde right now. She’s probably my favorite. I also really like Typhoon and Noah and the Whale. Those are my three favorites right now.”

So what does Willow’s life look like post-Mockingjay? She said she definitely wants to keep acting. Though she told us she has a couple new projects in the works, she wasn’t able to share them with us — yet.

We asked if Shields had any advice for young girls looking to become an actress, like her. “Just keep trying. Everyone has times when they’re sad about not getting a certain part, but keep trying. Just keep going because there’s always going to be something that works for you. Always believe in yourself.”

Thanks for the great advice, Willow! The Hunger Games: Catching Fire releases on Blu-ray and DVD March 7.

Are you going to purchase the DVD? Tell us in the comments section below.