Jared Leto took to Instagram today and announced his mother would be his date to the Oscars, as if you needed another reason to love this guy. 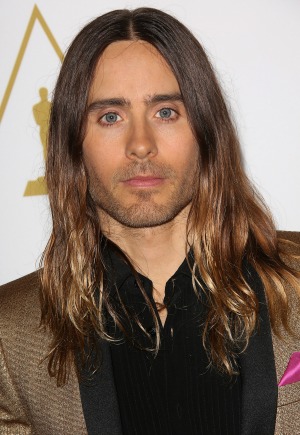 Jared Leto is nominated for Best Supporting Actor at this weekend’s Academy Awards for his mind-blowing performance as Rayon in the much-lauded film Dallas Buyers Club. The super-talented Leto surely has his pick of the litter when it comes to dates nowadays, but the actor proudly announced today that he will be arriving escorted by his mama, Constance Leto.

Jared shocked audiences with his dramatic transformation in Dallas Buyers Club, in which he plays a transgendered AIDS patient named Rayon. Rayon joins forces with Matthew McConaughey’s heterosexual cowboy character to fight powerful, yet deceptive, pharmaceutical companies in the early 1980s. Many critics think Leto is a shoo-in for the win.

The 30 Seconds to Mars front man posted a screen grab of his beaming mom on FaceTime with the caption “my mothers face when @shannonleto and I told her she was coming to the #Oscars with us! :)” Pictured next to Leto was the actor’s brother/bandmate, Shannon. And wow is this family swimming in a dazzling gene pool.

While Leto’s choice of date is heartwarming and adorable, one public figure who might be a tad unhappy with the choice is Miley Cyrus. US Weekly reported just days ago that “The Wrecking Ball” singer has been cozying up with Leto, and the pair are much more than friends.

In fact, there has been a lot of speculation about Leto’s love life lately as his star rises. The rock star has recently been linked to Kenyan actress Lupita Nyong’o and Game of Thrones star Emilia Clarke, in addition to Cyrus.

This won’t be Constance’s first Dallas rodeo… Leto also brought her to the SAG Awards in January.

Do you think Leto is bringing his mother again to avoid future scrutiny of his love life? Or is Mama Leto simply his award season good luck charm?