After public records requests from various news outlets, The Miami-Dade County prosecutor has finally released video footage of Justin Bieber performing sobriety tests, and the star is certainly not looking as footloose and fancy-free as he does on stage. 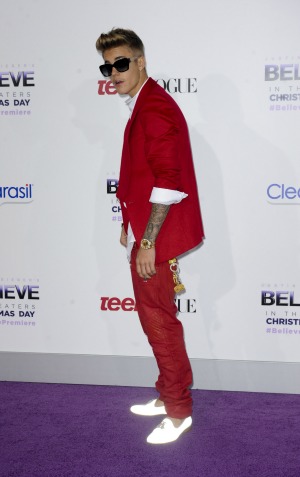 Video released of Justin Bieber and R&B singer Khalil Amir Sharieff being held at the Miami Beach Police Department depicts a wobbly Bieber as his friend looks on. Both were brought in on suspicion of drag racing in January, but those charges were never filed, according to ABC News. During the night in question, Bieber did test positive for prescription Xanax and marijuana and was charged with DUI. He has plead not guilty despite the test results.

If Kevin Hart were Justin Bieber, he’d buy a monkey too >>

The footage has been released hot on the heels of Bieber’s latest scandal, as a member of his security team was arrested just yesterday afternoon for stealing the camera of a paparazzo.

In the 2 minute 39 second clip posted by the Sun Sentinel, Bieber seems very unsteady and even stumbles several times as the officer instructs him to walk a straight line. At one point during the video, the singer stops the test and has a short exchange with the police officer. It appears that Bieber may be explaining or providing an excuse as to why he is not aptly performing the tests.

Bieber has shown pattern of disrespectful behavior since the beginning of 2014. At the opening of the year, the pop prince was investigated for vandalism after being accused of egging a house in his own neighborhood in Los Angeles. In mid-January, he publicly urinated his initials into the snow in a posh Snowmass, Colorado neighborhood. It was reported he dropped over $75,000 on strippers in Miami during that same week.

Bieber spent some time looking for religion in early February by searching for a place to be baptized in New York, so it’s possible he has done some soul searching.

Do you think the release of the embarrassing footage will serve as a wake-up call to the young star? Or will his out-of-control behavior continue?