During a recent conference call, Vikings star Alyssa Sutherland had plenty to say about the upcoming season. Now that the Season 2 premiere has aired, we can chat about her new role as “the other woman.” 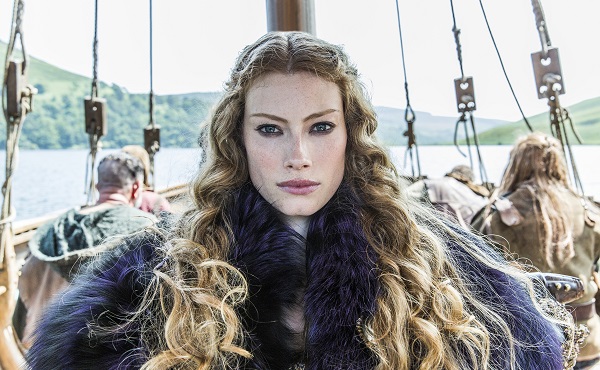 Tonight we saw a very pregnant Aslaug float up to Ragnar’s home and (perhaps accidentally) send his wife, Lagertha packing. Fear not, Vikings fans! Lagertha will eventually return. In the meantime, we spoke to Alyssa Sutherland (Aslaug) via conference call and tried to get into the head of Ragnar’s “mistress.” Did Aslaug have any idea what she was getting herself into when she boarded her boat and followed Ragnar home?

Want more Season 2 spoilers? We collected quite a few from chatting with the cast >>

“You know, I think Aslaug maybe wasn’t thinking about having a baby when she met Ragnar. I think she met a guy… You know, he’s a hottie. They liked each other. I don’t think when she first met him that she was necessarily thinking with her head. I think she had a really strong pull towards him and didn’t know what to do about it and followed that and just didn’t think about it. But, then she gets knocked up,” Sutherland explained. Later she added, “… and the guy that does it goes back and leaves her. So, what is she supposed to do? She was orphaned herself and raised without her parents. She’s going to make damn sure that doesn’t happen to her kids.”

Hmm… sounds like something that still happens today, right? Sutherland also mentioned it was important for viewers to keep an open mind about Aslaug’s situation. “Cheating” and sleeping around wasn’t as scandalous back then as it is now. She reminded us of the premiere of Vikings.

“You know, it’s funny because people love to say that she’s a homewrecker and she’s ‘the other woman,'” Sutherland said. “But, if you think about it from her point of view and in that time period, men did sleep with other women when they were away. That was something that was mentioned in Episode 1 of Season 1. Lagertha tells Ragnar, ‘don’t sleep with too many women in Kattegat.'”

All that blood! Can Floki survive the blow? >>

Speaking of Lagertha: Yes, she will be back. As a matter of fact, this season we’ll watch as the Vikings explore the possibility of polygamy. Don’t cringe, guys. It might be taboo now, but there are plenty of recorded instances of polygamy throughout history, including during the Vikings time. So, when Lagertha returns to her husband, how will the two women get on?

“I think the way that Lagertha and Aslaug feel towards one another changes over the course of the season,” Sutherland shared. “Just like the other relationships in the show, it goes through it’s ups and downs so to speak. It’s a complicated one. It’s a really complicated one to explore and there’s so much to explore.”

Vikings were a deeply spiritual people. They believed their dreams were signs from a greater power, which might also explain why Aslaug was quick to fall for Ragnar and why Lagertha will ultimately come to terms with her new situation. Vikings didn’t challenge what they were sure was “meant to be.” Sutherland says when she first talked with showrunner Michael Hirst, he told her Aslaug believed she was destined to be with Ragnar.

“It’s interesting when Michael Hirst and I talked about Aslaug at the end of that first season. When I came on to film it, we weren’t talking about manipulation,” Sutherland shared. “We weren’t talking about this woman with real ulterior motive. We were actually talking about Aslaug and Ragnar feeling like they were destined to be with one another and having this feeling that this is destiny and fate. You know Aslaug believes that she’s a seeress and you know that’s such a cool character and an exciting one for the viewers to see. If that’s who she believes she is as well, there was probably moments before she met Ragnar that she felt she was going to meet a strong, powerful, influential man and that’s who she was destined to be with. And I think that’s who she believes Ragnar is to her when she first meets him.”

For more TV news, reviews and interviews, sign up for our newsletter >>

We all know what that pull feels like, right? Can we really blame Aslaug for following what she thought to be her destiny and, ultimately, for making her baby daddy assume responsibility for his creation?

To find out how Aslaug fairs and see the return of Lagertha, tune into Vikings Season 2 on History, Thursdays at 10/9c.