Pippa Middleton stole the show at her sister’s wedding, and three years later she’s finally opening up about that dress. 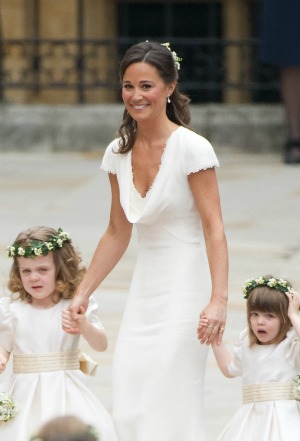 Pippa Middleton made her international debut nearly three years ago at her sister’s wedding. Although Kate Middleton‘s marriage to Prince William was one of the biggest events of 2011, Pippa Middleton was the unlikely star of the event, due in large part to the form-fitting dress she wore as a bridesmaid.

Kate and Pippa Middleton and other royally cute celebrity sibs >>

That dress, designed by Sarah Burton for Alexander McQueen, launched Pippa onto the international scene and launched her career as a party planner and part-time tabloid star. Although Middleton’s life has never exactly been private, she’s finally opening up about that dress and what it meant to her life.

“As I have found out, recognition has its upside, its downside and — you may say — its backside,” Middleton joked to an audience at a dinner for Women in Advertising and Communications in London, via E! News.

The 30-year-old added that she was just “glad it fitted” for the wedding, but said that “in retrospect, it fitted a little too well.”

Over the past three years, Middleton has shown her ability to joke about her life. After selling only 2,000 copies of her new book in the first week and being mocked by members of the media, she later tweeted some obvious party planning tips.

Middleton was offered her book deal shortly after the wedding and she became a target of the paparazzi, something she didn’t expect. She has spoken about her sudden fame before, but never in relation to the dress. In 2012, she told the UK Telegraph that “it is a bit startling to achieve global recognition before the age of 30 on account of your sister, your brother-in-law and your bottom. One day I might be able to make sense of this. In the meantime I think it’s fair to say that it has its upside and its downside.”