Kate Hudson and Matthew Bellamy are reportedly having relationship troubles and may be headed for a breakup. 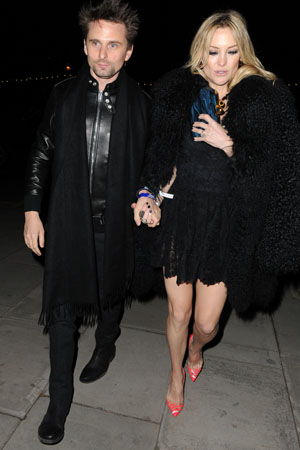 Things may not be going well between Kate Hudson and Matthew Bellamy after reports surfaced that the couple is having relationship troubles.

Sources told Us Weekly that Hudson and the Muse front man have been going through some issues and could be rethinking their future wedding. “They realized they are in different places in their lives. They grew apart,” an insider added.

The pair, who began dating in 2010, and their 2-year-old son, Bingham, spent Christmas together in the U.K. with Bellamy’s family. However, the two have not been seen together since then, and Hudson even showed up alone at the Sundance Film Festival in Utah to promote her new film, Wish I Was Here.

Then, on Tuesday, Hudson was again dateless for her appearance at Bulgari’s Decades of Glamour party at the Soho House in Los Angeles. The Bride Wars star also rose lots of eyebrows because she was not wearing her engagement ring.

“She looked like a supermodel,” an eyewitness told Us. “She seemed to be in a great mood.”

Are Kate Hudson and Matt Bellamy ever getting married? >>

Another source in the know told People magazine that despite their problems, Hudson and Bellamy are still living in the same house and “Kate is not giving up.” However, plans to get married seem to have been postponed indefinitely.

During a January appearance on Live With Kelly and Michael, Hudson said that she was not planning anything regarding a wedding right now.

“I’m so busy, we’ve been so busy, and it’s been great. I come from an unconventional family — my parents aren’t married,” Hudson said. “So there’s a part of me that goes, ‘If I’m going to do it, I’m going to do it right and I’m going to take the time to really plan it right’. And it’s a lot… So, no. Not anytime soon, no.”