While shooting the biopic on Southern rocker Gregg Allman titled Midnight Rider, camera assistant Sarah Elizabeth Jones was struck and killed by a freight train that roared across a bridge where she and her crew were filming.

Police are currently investigating what went wrong and who was at fault when the train hit and killed the 27-year-old crew member. During the fatal accident on the 110-year-old bridge that runs above the Altamaha River, seven other crew members were injured and treated at a nearby hospital.

What Slates for Sarah means to Hollywood, and how to help >> 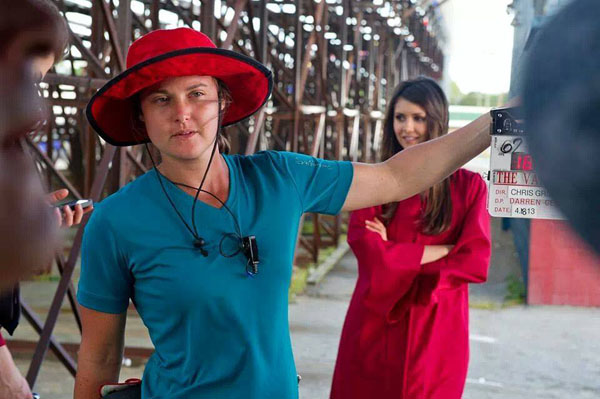 According to the Los Angeles Times, the film’s U.S. distributing company, Open Road Films, and the company producing the documentary, Unclaimed Freight, had permission from the railroad operator to film near the train tracks. However, they were allegedly not allowed to shoot on the actual railroad tracks.

Detective Joe Gardner of the Wayne County Sheriff’s office said that “there is going to be an issue about whether they had permission to be on the tracks,” since the filmmakers are claiming they did. Apparently, a train schedule they were given had two trains scheduled to go by the area, but the third one, which struck Jones, caught them by surprise. According to Variety, it appears the production did not follow proper safety procedure “typical of a film shoot that has cooperation of the railroad.” Crew members could face criminal prosecution in relation to trespassing and “putting an obstruction on a railroad line” if it’s found that the railroad did not give permission.

The camera that may have caught Jones’ death has been impounded by the Wayne County Sheriff’s office, and filming of Midnight Rider has been suspended. Variety reports that many crew members have retained lawyers.

Meanwhile, as authorities try to determine what the permissions were for filming on the tracks, Hollywood’s film community has come together to launch Slates for Sarah, a Facebook page to honor Jones and her life, as well as the role of workplace safety on movie sets. The page has spawned ways for people to honor Jones and to participate in different causes. Those interested can donate to a special scholarship fund, or sign a petition to have an In Memoriam segment for the fallen film worker at the Oscars.

Jones had a promising Hollywood career ahead of her and worked with film crews on popular shows such as The Vampire Diaries, several TV movies and shorts.

Miller pleaded guilty to involuntary manslaughter. With the plea bargain, he’ll carry a two-year sentence in prison, 10 years’ probation, a $20,000 fine and 360 hours of community service. Charges against his wife Jody Savin are dismissed. According to Deadline, Jones’s parents reacted, saying, “No one won anything today. It’s just a great deal of loss for everyone involved. I hesitate to use the word ‘happy.’ We are content with the terms of the agreement… the sacrifice of our daughter will change the industry for the better.”