It’s down to the final two on The Bachelor: hairstylist Clare and pediatric nurse Nikki. Who will win Juan Pablo’s heart? You be the judge. 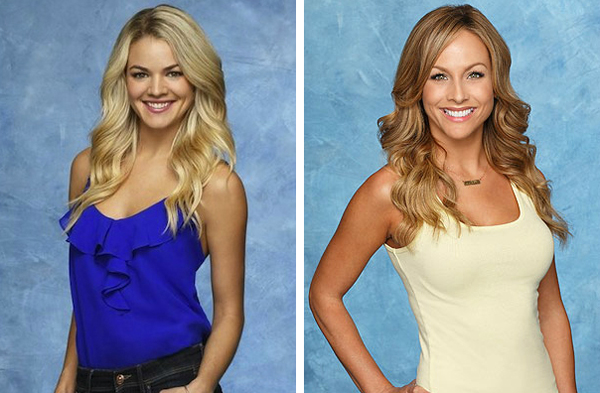 Nikki is a 26-year-old pediatric nurse from Kearney, Missouri. She is 5 feet 9 inches tall and has four tattoos. Her greatest achievement is her nursing degree and pursuing her dream job.

Clare is a 32-year-old hairstylist from Sacramento, California. She is 5 feet 5 inches tall and has two tattoos. She says that her greatest achievement is owning her own business and becoming successful in her own eyes.

Nikki wowed Juan Pablo, and may or may not have accidentally put Juan Pablo’s hand on her boob instead of her heart. According to Chris Harrison, that’s exactly what happened. Oops! But Juan Pablo didn’t need to cop a feel on the first night to feel the attraction. The two instantly hit it off.
Who could forget Clare exiting the limo in that fuchsia dress with a giant baby bump? It was fake, but Juan Pablo didn’t seem to mind either way. He was too busy staring into her eyes, and she couldn’t stop smiling.

Nikki and Juan Pablo shared their first make-out sesh in Episode 5, while hanging upside down after jumping off a bridge, no less. That’s definitely one way to make it memorable.
Clare was the first to get a one-on-one date with Juan Pablo in Episode 2, and she wasted no time snuggling up to him in that hot tub. The two shared quite the steamy encounter.

Kiss count (on camera, at least)

Nikki’s date with Juan Pablo and his family in Miami was hands-down their best date. She got to meet his daughter before any of the other girls, and it only brought them closer together. It gave the two a chance to interact in everyday life, and they were both totally diggin’ it.
Clare’s first date with Juan Pablo was her best. She snagged the first one-on-one in a winter wonderland-inspired date. The two were quick to bond in that hot tub, and it was obvious the sparks were flying.

The girls of Season 18 have given Nikki a hard time for being negative. She and Clare especially don’t get along so it’s ironic the two are Juan Pablo’s final picks. Nikki has been tagged by some as Season 18’s villain, though she’s far from the worst we’ve seen in the show’s history. (Just remember back to Tierra from Sean’s season and Nikki will look like a saint.)
Clare and Nikki have had their share of catty moments, but the most surprising argument was between Clare and Juan Pablo. After a late-night romp in the ocean, Juan Pablo sat down with Clare and told her he regretted the decision! Clare was quick to stand up for herself, pointing out Juan Pablo was a willing participant at the time, but still had her feelings hurt.

Nikki’s hometown date went about as smoothly as possible considering the circumstances. Nikki spilled her heart to her mother, explaining she would accept a proposal if he asked. Nikki’s dad counseled both his daughter and Juan Pablo, saying, “It’s just as important for Nikki to select him as it is for Juan Pablo to select her.” Though Nikki was ready to tell Juan Pablo she loved him, she backed out in the final moments.
There was definitely some family drama going on during Clare’s hometown trip, but it wasn’t between Juan Pablo and Clare’s family. Clare and her sister got into it because Clare felt like her sister was ruining her moment and acting overbearing. The trip ended on a high note, though, when Clare’s mother and Juan Pablo bonded.

“I either live or I die or I poop my pants.”
“It’s always been my lifelong dream to go swimming in a warm ocean.”

Nikki is the only one to tell Juan Pablo flat out, “I love you,” during their latest dates. She accepted the fantasy suite date without a problem and the two made out as the cameras faded to black against the picture-perfect backdrop of St. Lucia.
After her frolic in the ocean didn’t go so well, Clare is hesitant to accept the night in the fantasy suite with Juan Pablo. Clare eventually decides to accept the night alone after the two have a heart-to-heart. There, she spills her feelings and confesses she’s falling in love with the bachelor.

Who do you think is the best match for Juan Pablo? Will he go home with Nikki, Clare or no one?