Mayim Bialik is an outspoken mom who wants to share her parenting views with the world on how she is an advocate for breastfeeding in public. Is she right? 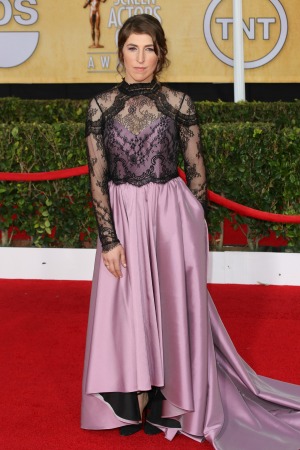 The Big Bang Theory star Mayim Bialik has decided to lend her support to women who choose to breastfeed in public and explain why she, as a mom of two healthy sons — Miles, 8, and Fred, 5, whom she shares with former spouse Michael Stone — has no regrets about breastfeeding in public areas.

During an interview with the Huffington Post on Friday, the actress shared her views, saying, “I think anywhere you give a bottle, you breastfeed.”

“I didn’t feel the need to be immodest, but also feel like that’s going to vary from woman to woman.”

9 Celebrity moms who breastfed in public >>

In fact, this is a topic that is clearly close to Bialik’s heart because she has previously come under fire for posting a photo of herself publicly breastfeeding her son Fred, who was 3 years old at the time. And there has been much debate about when to stop nursing a child, and where it is appropriate to do so.

Despite the fierce opposition that the Blossom actress faced at the time, she is determined to stand by her decisions. Bialik jokingly addressed the situation when she breastfed her son Fred on a New York City subway train, saying, “What I like to point out is that was the best way for that subway ride to be pleasant for everyone. It was the end of a very long day.”

Can your parenting style destroy your marriage? >>

Bialik continued to share her parenting views, saying, “Breastfeeding is not a sexual act. It’s an intimate act, and that makes some people uncomfortable.”

“But that’s completely normal to have all of the humane hormones that are released when you breastfeed, regulating your relationship with your child — that’s simply normal.”

Tell us: Is breastfeeding in public normal? Or should it be done in the privacy of your own home?