Klaus gets more upset tonight on The Originals than we think we’ve ever seen him. And that’s saying something. Run, Rebekah, run! 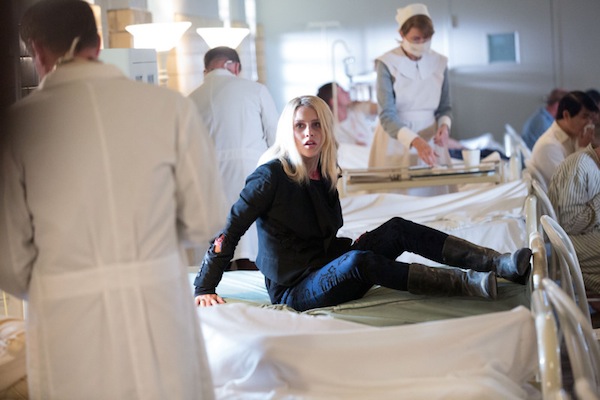 There’s only so far Rebekah can run before her dirty little secrets catch up with her. It is confession time tonight on The Originals, albeit, coerced confession thanks to Genevieve. Klaus takes it just about as badly as one would expect. Parents everywhere should be thanking their children tonight. If they thought they had it bad with sibling rivalry, Klaus (Joseph Morgan), Rebekah (Claire Holt) and Elijah (Daniel Gillies) put them to shame.

After discovering Rebekah gave Genevieve TB, which caused her death, all for the sake of protecting herself against Klaus, we can’t really blame Genevieve for wanting some good old-fashioned revenge. She exacts her plan by sharing Rebekah and Marcel’s secrets with Klaus. It is because of Rebekah and Marcel that Mikael arrived in New Orleans and destroyed their lives.

Granted, Rebekah regretted the decision after coercing Genevieve to perform the spell to locate Mikael. And she and Marcel only wanted to do the spell because Klaus had his head too far up his own — you get the point — to allow the two to simply be together in love. Part of me thinks Klaus deserved it. Part of me thinks Rebekah is too in love with the idea of being in love for her own good.

After Genevieve fills Klaus in on all the juicy 1919 details, Klaus is so consumed with rage he bellows a mighty, “Rebekah!” that would send any rational person running for the hills. And that’s just what Rebekah does. If only she could figure out how to get out of the sanatorium she worked at for a really long time. OK, we’ll attribute her directional challenges to the fact that she’d been bitten by a werewolf a few times.

It really doesn’t take Klaus long to hunt her down with Papa Tunde’s knife in his hand and at the ready. No more box time for Rebekah. This time Klaus means business.

Apparently, so does Elijah, because our favorite brother shows up just in time. He makes the only decision he can to save both his siblings: He uses Papa Tunde’s dagger against Klaus and stabs Klaus in the chest with the blade.

Like a good brother, he keeps Klaus in his arms and Klaus crumbles to the ground, unable to withstand the pain and power of the dagger. Ouch! That’s two betrayals for Klaus in one day. Again, not to say he didn’t exactly deserve it.

Other tidbits to note