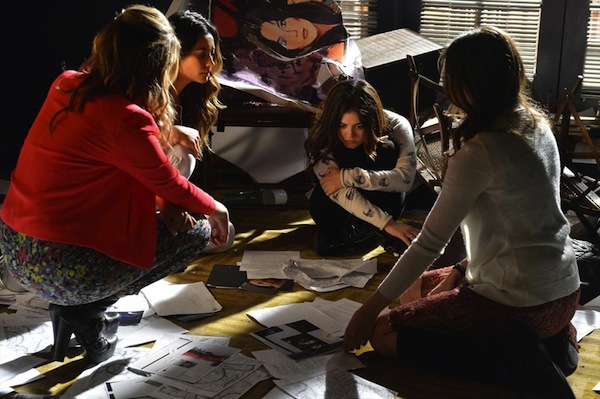 Well, now that Ezra is innocent, the next suspect on Pretty Little Liars is one of the liars. Ezra’s been keeping his own little secrets because he thinks one of the girls is guilty, specifically Spencer (Troian Bellisario).

Oh and Paige. Paige could definitely be an emerging suspect too. No one on the show suspects her yet, but after this episode, we think she’s definitely a possibility. It shouldn’t really be that surprising. She is overdue for a little well-deserved suspicion. After all, she’s been on the show since Season 1.

First up on the suspect list is Spencer. Out of all the liars, she’s the most likely to have tried to kill Alison. First piece of evidence: She was on the pills the night Ali went missing and doesn’t even remember a lot of the events from that evening to begin with. Secondly, Alison and Spencer did argue that night. Spencer admits remembering the fight. Finally, Alison’s mom, Jessica DiLaurentis, saw Spencer holding a shovel and chasing after Alison.

As all of this evidence comes to a head, let’s just say Spencer’s withdrawal tactics don’t go as well as planned. She caves and treats herself to a few pills from a stash A was so kind to taunt her with. That doesn’t help with her pleas for the truth, especially not in her father’s eyes. Spencer thinks her father is also suspicious that she was behind Ali’s disappearance and hired a private investigator to follow her. Dear dad won’t confirm or deny his daughter’s allegations, simply attributing her questions to her tough withdrawal symptoms.

In the midst of this week’s game of “Who Done It?” Aria (Lucy Hale) decides it’s time to mess some things up for Ezra, who has conveniently taken a leave of absence following their confessional last week. When she can’t confront him at school, she heads to his apartment. When she discovers he left town, she destroys his apartment and combs through his piles of evidence.

Once she sees the letter from his literary agent and confirms his book deal is still on, she goes over the edge insane. She believes Ezra lied to her about getting rid of the book and decides it’s time she spilled their steamy affair to the principal. Without thinking about the repercussions for herself or her family, she storms over to the school principal’s house. Luckily, Emily (Shay Mitchell) is there to knock some sense into her.

Emily may stop Aria from giving the principal the goods on her relationship with her teacher, but she can’t stop Aria from continuing to have a nervous breakdown. Next on the Aria rampage, the girl decides to get the heck out of dodge. She packs a bag, intent on leaving town. Emily can’t stop her.

What’s a girl to do at that point? And Emily’s got problems of her own. When Paige sees Emily dropping the money for Ali, she starts asking all sorts of questions and won’t be satisfied without the truth. Emily is forced to tell Paige that Ali is still alive. Paige isn’t jumping on the whole Alison bandwagon, though, which we can totally support. Instead, she wants Emily to tell Ali’s family the truth or go to the police. Emily refuses to do either because she doesn’t want to leave Ali vulnerable to A.

Paige won’t take no for an answer. This is where she loses us. Paige goes behind Emily’s back and plants a note in the police car, letting them know Ali is still alive. Dun, dun, duuuuun.

So what does that mean? Is Paige secretly working against Ali on Team A? Or is she really trying to look out for Emily’s best interests?