Coulson persuades the team to take drastic measures to save Skye’s life, but will it be worth the effects of the cure? Find out in our review of “T.A.H.I.T.I.” 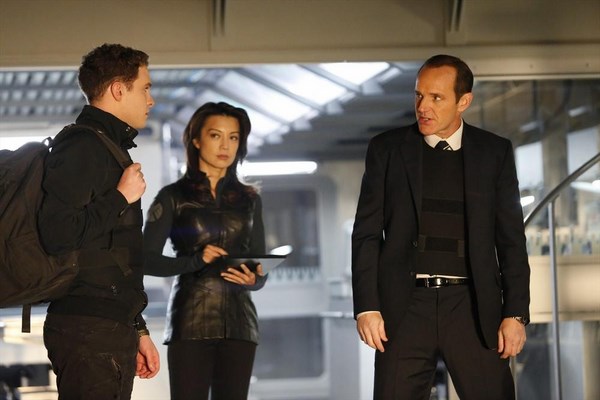 There was a little scene in this episode of Agents of S.H.I.E.L.D. that really made me stop and think — and I’m betting it’s probably not one that anyone would guess would have that effect. It was the point where Simmons admitted to Trip that she had only known Skye for a few months and that they had absolutely nothing in common. And yet, Trip understood immediately that she couldn’t imagine her life without the sassy computer genius.

Maybe it’s the fact that their lives revolve around such complicated jobs. When you’re saving the world pretty much on a daily basis, it’s bound to make you bond with your teammates. Coulson also voiced that sentiment when the doctor told him to call Skye’s family and he told her that they are Skye’s family.

That’s been a growing theme throughout this fledgling series, and this episode proved that also goes for extended family as well. I was afraid that Garrett and Trip were going to come on board and act like jerks with a holier-than-thou sense of mission, but instead, they joined Coulson and his crew in their fight to keep Skye alive.

That’s where things got very interesting and more than a little frightening. In my review of the last episode, I talked about how I thought Skye would probably survive her wounds, but there might be other repercussions to the mission that got her shot in the first place. As it turned out, it wasn’t so much the previous mission that was important. It was the lengths the team went through to save her.

Considering the horror that Coulson went through when he died and was brought back, he must really care for Skye a lot to think about doing the same thing to keep her alive. I wasn’t sure what the team would find as they followed the clues through his miraculous recovery, but I was completely unprepared for where they ended up.

When Coulson came stumbling down that long hallway looking like he’d seen a ghost, I had a feeling it was bad. Just the mere fact that — after all they had been through to find it — he would scream that they shouldn’t give the GH-325 to Skye meant he must have seen something pretty awful.

But as I laid eyes on that alien body and watched as the liquid was being pumped from it, I knew that the implications of Skye getting shot had just taken on a whole new meaning. Not only that, but Coulson’s recovery did as well. Both of them have the blood, or whatever it was, flowing in their system, and I just can’t believe there won’t be effects from that. Whether those effects are good (superpowers, maybe?) or bad… well, that remains to be seen.

“What you’re describing is medically impossible.”
“Except for the fact that I’m standing here.”

Ward admitting that he liked seeing May go after Quinn. He wasn’t the only one.

Fitz-Simmons following the virtual paper trail to Director Fury and the location of the Guest House. Those effects were amazing.

Garrett telling Fitz he was too serious.

Can you get us inside? To certain horrible death? Absolutely.” — Loved that Fitz got the chance to be a part of that team.

Garrett informing Quinn that the good news was that he still had his tongue.

What did you think of this episode of Agents of S.H.I.E.L.D.? Do you have any theories on what the effects of the GH-325 will be?