They made a big splash in Sochi and now they are hitting Hollywood. Tara Lipinski and Johnny Weir are going to the Oscars! 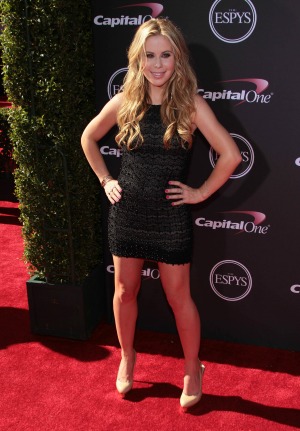 The hottest stars of the Sochi Olympics, Tara Lipinski and Johnny Weir, aren’t going away any time soon. In fact, they will be turning up on the red carpet on Hollywood’s biggest night.

The dazzling duo will be a part of Access Hollywood‘s coverage of the Oscars on Sunday. Lipinski spoke to VF Daily about her new gig with NBC.

Lipinski said, “We weren’t expecting this at all. We came to Sochi as rookies and wanted to do a good job, but now we are doing the red carpet at the Oscars!”

It was the entertainment show’s host, Billy Bush, who secured the gig for the former Olympians. It was their flair for fashion though that sealed the deal with the show’s executive producer, Rob Silverstein.

The 1998 Olympian shared, “We’re probably the most nuts about fashion in the skating community, and we like to have fun with it.”

Lipinski now has to find the perfect dress for the most glamorous red carpet of the year. As a fan of The Hunger Games, she hopes to bring some of that flavor to the Dolby Theatre on Sunday. She’s also dying to meet the franchise’s star, Jennifer Lawrence.

“I have to meet Jennifer Lawrence. What she wore last year was stunning. I love anything Dior, and I hope to see a lot of it on the red carpet,” said the 31-year-old fashionista.

She also knows to keep her eye on the best-dressed woman this award show season, Lupita Nyong’o, who has become every designer’s dream to wardrobe.

It’s the perfect fit for the pint-sized TV personality as she brings her two passions, fashion and color commentary, to life on Sunday’s red carpet.