It’s been one long saga for Tori Spelling and Dean McDermott. The couple is trying their best to reunite their family. 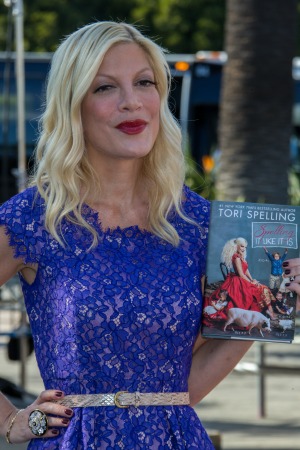 After checking into rehab 30 days ago, Dean McDermott is out and back home with his family in Los Angeles. His reasons for his stint in the California facility were never clear, but he did check in after a public cheating scandal affected his marriage to Tori Spelling.

According to Radar Online, the dad-of-five wants his wife to get help next. He believes she has an issue with out-of-control spending.

A source told the gossip site, “Dean has told Tori she needs to get treatment for her spending, which is putting added pressure on the family. Tori’s spending is out of control… She will go through periods when it’s not an issue, but then she slips and buys stuff the family simply doesn’t need.”

This frivolity with the family’s money has caused tremendous pressure in their marriage.

“There are nights that Dean doesn’t sleep because he is so concerned about how they are going to pay the bills. Tori is willing to get help, but complains she doesn’t have time because of their four kids,” continued the insider.

Their seven-year-marriage has been on the rocks after his cheating scandal in December. His subsequent rehab visit had revealed that there was more than one woman whom McDermott had bedded over the years.

Tori Spelling struggling to keep the family together >>

While Spelling’s mom, Candy, is encouraging a reconciliation, the former 90210 star seems to be at a crossroads.

A second source shared, “The couple has no prenuptial agreement and Tori is the sole breadwinner. Dean wouldn’t settle for anything less than joint custody and Tori would be forced to pay him spousal and child support. It’s a really sad situation for Tori and the kids.”

It sounds like the family is really stuck in a difficult place right now, and there seems to be no light at the end of the tunnel. It will be interesting to see if the couple can weather this brutal storm.