Khloé Kardashian is stuck in Splitsville. The reality star is not only fielding questions about her pending divorce from Lamar Odom, there’s the topic of Kris and Bruce Jenner’s separation to tackle too! 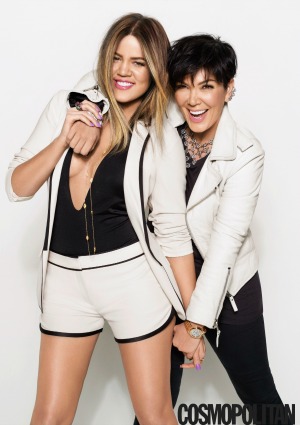 Cosmopolitan has the latest from the former Khloé & Lamar star, having been privy to a conversation between the 29-year-old Kardashian and her momager mother.

Khloé Kardashian continues to hint at romance with The Game >>

“There was no scandal. There was no bad blood. You’re just happier apart,” Kardashian replied after Kris Jenner asked for thoughts on her separation from Bruce. “You are nicer to each other now. You get excited to see each other at dinners.”

However, there is one element of the Jenners’ split that hits the tall trampoline warrior right in the feelings.

“It makes me sad that people think Bruce is no longer a part of my life,” Kardashian explained. “I talk to him every day! I consider him my second father.”

When pressed by her mother to pinpoint who is the “glue” holding the blended Kardashian-Jenner family together, she politely skipped naming names.

Opening up to the magazine about her own divorce, Kardashian insisted she “wouldn’t change a thing.”

“Your life is meant for you to understand and process, not to make anyone else happy,” she went on to advise. “I don’t have any regrets… you learn as you go.”

Though she’s reluctant to make any predictions of the future, the sister of Kim and Kourtney Kardashian knows this for sure: “I love kids. I hope and pray I have kids when the time is right.”

For more from Khloé Kardashian, check out the latest issue of Cosmopolitan, due on newsstands March 4!