Jenna Fischer is joining the baby boom in Hollywood, announcing she and her husband are pregnant with their second child. 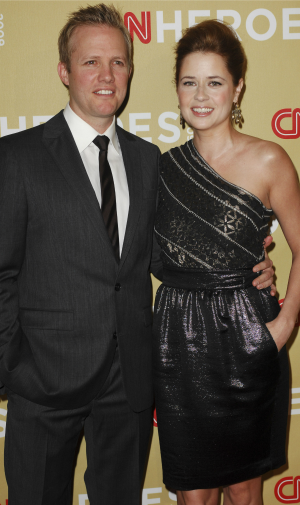 The Office may be done, but Jenna Fischer has a whole new reason to celebrate. The star’s rep has confirmed that she and husband Lee Kirk are expecting their second child, according to E! News.

The Office‘s Jenna Fischer defends keeping on the baby weight >>

The actress also made a confirmation by retweeting Us Weekly‘s article about the pregnancy. The rumors started after she responded to Jimmy Kimmel’s wife (via E! News), Molly McNearney, on her own pregnancy news by saying, “Let’s talk 🙂 Congrats!”

Fischer and Kirk have been married since 2010, and have a 2-year-old son, Weston together. Back in January 2013, when Weston was one year old, Fischer told People she was loving life as a mom.

“I had really underestimated what I was capable of because, before I had him, I thought I needed things that I didn’t really need,” Fischer continued. “I want nine hours of sleep, but it turns out I don’t need it! I’m not cranky during the day because… the excitement of being with him and watching him learn and watching him grow and being a facilitator of those things is so joyful.”

Christina Aguilera is expecting baby No. 2! >>

In hindsight, Fischer has been giving hints of her pregnancy, including an important one last week.

Fischer’s first pregnancy made its way into the story line of The Office — Weston starred as Jim and Pam’s baby. John Krasinski, who played Jim, just had his own baby with wife Emily Blunt. The Halperts would be so proud.

The TV actress has transitioned to movie star and has two new movies out this year — You Are Here and Kiss Me. However, both have already been shot, so she will have a well-deserved time off to welcome her newest bundle of joy.