As I Lay Dying’s Tim Lambesis was arrested nearly a year ago for attempting to have his wife killed, and he finally admitted his guilt in a California court. 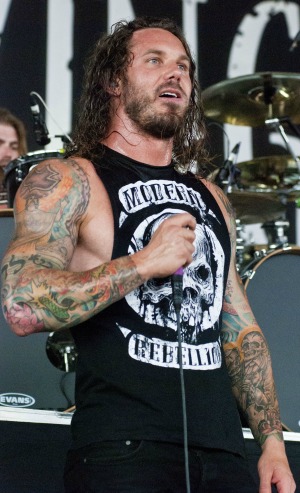 A Grammy-nominated singer accused of attempting to hire a hit man to kill his wife pleaded guilty to the crime in a California court on Tuesday, Feb. 25. According to Alternative Press, Tim Lambesis, lead singer of the Christian-metal group As I Lay Dying, changed his plea while in the courtroom, admitting to attempting to have his wife killed.

An open letter to Rihanna and domestic violence victims >>

According to NBC San Diego, Lambesis approached a trainer at his gym and asked if he knew anyone who would be willing to kill his wife Meggan.

Lambesis was arrested back in May 2013 for Solicitation of Another to Commit Murder for the attempt. The singer had reportedly said his wife would be getting 60 percent of his income in a divorce, and she also did not want her children on tour with him. She filed for divorce from Lambesis in September 2012.

As I Lay Dying has sold more than 1 million albums, and were nominated in 2008 for a Grammy for Best Metal Performance.

Lambesis’ estranged wife has also sued him for $2 million for “emotional distress, medical expenses, damages and legal fees,” according to the AP.

Man found guilty of homicide in death of Usher’s stepson >>

Shortly after Lambesis’ initial arrest, the band released a statement saying (among other things), “Our thoughts right now are with Tim, his family and with everyone else affected by this terrible situation — and with our fans, whom we love and draw strength from.”

The band has not posted anything on their Facebook page since April 2013. Lambesis is scheduled to be sentenced May 2.