Kim Kardashian and Kanye West have decided to scale down and have a very small wedding in Paris. The reality star also said she may want one or two more kids. 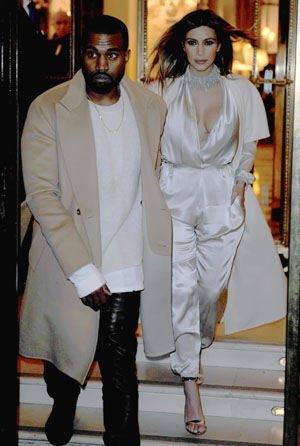 Ditching the plans for a spectacular giant wedding in Paris, Kim Kardashian and Kanye West have decided to scale way down and have a small ceremony instead.

Kardashian revealed to Ryan Seacrest during his KIIS FM radio show that she and West are planning a very tiny Paris wedding in place of the large affair they initially wanted.

“We’re having a super, super small, intimate wedding,” Kardashian said. “As we go along, we’re realizing we want it to be smaller and more intimate than people are imagining or thinking.”

West boasted about a lavish ceremony that would rival his outlandish proposal to his fiancée, but Kardashian wasn’t so much into the idea of such a big affair. So, it looks like the pair has settled on doing something smaller, although with the rapper’s involvement in the planning, small to him could mean epic proportions to the regular guy.

Kardashian also dished on what it’s been like having a baby. “I’m loving life right now. My daughter is the cutest thing ever… I’m loving being a mom.” However, she admitted that at first she was very scared of the responsibility that comes with being a parent.

“Everything everyone tells you about having a kid — how it’ll change your life,” Kardashian told Seacrest, who is also a producer of her reality show. “[But] it’s the greatest experience, and you’ll love it — it’s that times 100.”

The 33-year-old reality star and mom to 8-month-old North West also gushed about her daughter, saying “she’s the sweetest, she’s the calmest” and is always laughing. She also said she’ll probably give the little girl a sibling eventually, but she wants to keep it down to three or fewer.

“I don’t think I can do more than three, tops,” Kardashian admitted. “That would be my absolute top, top, tops. I even contemplate, ‘Should North be an only child?’ But then I contemplate all the… fun experiences I had, so I might have to tough it out.”