Paula Deen is literally back in the saddle — with a little help from some liquid courage. 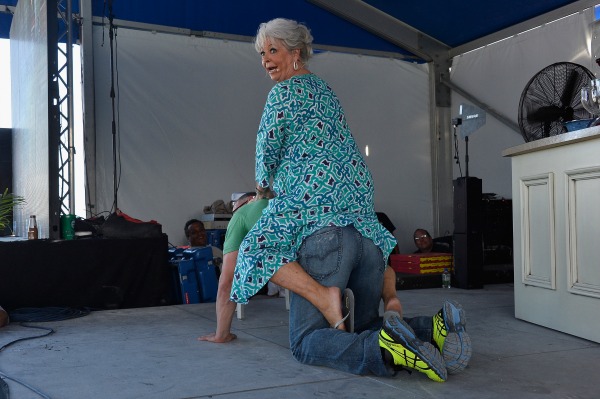 Paula Deen has risen from the ashes of her charred career and brought her over-the-top personality to the South Beach Wine and Food Festival, where she guzzled tequila and did a little horseback riding — on a colleague.

Before she began her cooking demo, the contrite Deen told the crowd, “I am not a quitter.

“We have come off a hard summer, my family and my partners… But you know, I have heard on more than one occasion that I’ve never apologized and I want to take a moment to apologize to those of you who didn’t hear me. I hope you see us bring back good memories for you,” an emotional Deen continued.

“Ya’ll’s cards and letters that I got helped me get out of bed every day.”

She then proceeded to ride Food Network chef Robert Irvine like a pony. “I’m back in the saddle!” she yelled.

Irvine, of course, is no stranger to scandal himself. He was canned by the Food Network in 2008 after discrepancies in his claimed work experience were discovered. He returned as host of Dinner: Impossible in 2009.

“This is a warning to you,” Irvine told Deen. “You’ve apologized. You’ve eaten crow. You’re done. Don’t do it anymore. I’ve been there.”

Perhaps to gird herself before taking on the masses during her live cooking demo, Deen was spotted swigging from a bottle of tequila prior to taking the stage — which might explain the pony riding.

It’s shaping up to be a big year for Deen. After a major career crash in 2013, including the loss of several lucrative endorsement deals, the chef’s new company Paula Deen Ventures recently announced a huge influx of cash from a private investment firm thought to be between $75 to $100 million.

“Our investment allows the Paula Deen brand to expand their relationships and the partnerships that are already in place, and support those partnerships on a go-forward basis,” explained Najafi Companies’ head Jahm Najafi.

“The important thing to remember is that her fan base is rabid. Her Facebook fan base has more than doubled in the past year,” he explained. “The Paula Deen brand is alive and well.”

Tell us: Do you support Paula Deen’s comeback?