We chatted with Vikings‘ Travis Fimmel, George Blagden and Alyssa Sutherland to get the dirt on Season 2. And trust us, there’s a lot of dirt. 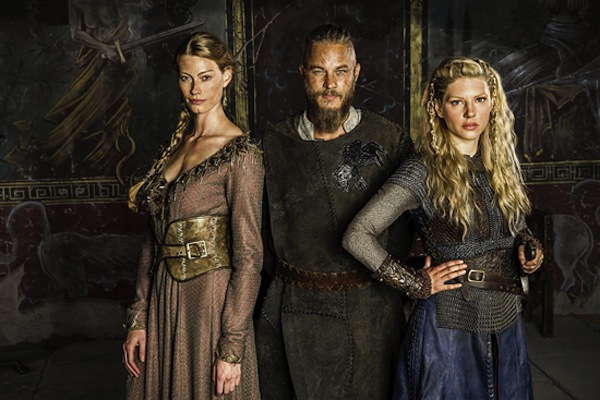 Image courtesy of the History Channel

If you liked Vikings last season, “I think this season is a lot better,” Travis Fimmel, who plays Ragnar, teases.

Season 2 will start four years later in the Vikings’ lives. After a plague and lots of death, the characters are picking up the pieces and moving on, which means Ragnar will continue his journey west.

“The adventure isn’t as strong as it used to be for him. But he really wants to help out his people and his community,” Fimmel shared. “And him going west is not about the discovery as much anymore, but it’s about trying to help his people survive and have enough food and all that sort of stuff. He wants to better his community.”

Family will continue to play an integral role in Ragnar’s life.

“I think reality sort of sets in as well and he’s gotten himself into a little bit of a pickle,” Alyssa Sutherland, who plays Aslaug, shared. “And that’s kind of interesting to see how all of the characters deal with [it].”

According to Sutherland, “There are some things that they go through over the course of the season, and I think where they end up is really kind of a nice thing.”

“Ragnar really falls in love with [Aslaug],” Fimmel said. “Lagertha seems to be chasing a bit more power now. She wants to be earl. It’s not about our community. She’s had a bitter taste of power and she’s more about that now. Aslaug’s all about our family and taking care of our four kids.”

Speaking of the kids, because Bjorn is four years older he’s getting quite the sexy transformation thanks to Hunger Games hunk Alexander Ludwig, who is stepping into the role.

“Alex does a tremendous job this year. And he’s a big, big boy. He grows quick in four years,” Fimmel joked.

On a more serious note, Fimmel talked about Ragnar’s relationship with his children this season. “He wants his sons to do well. He’s very tough on them. He’s very tough on Bjorn this year, his elder son. Especially, there’s a fight that happens, and his son messes up, and it really, really annoys Ragnar because he doesn’t want anything to happen to any of his children.”

His relationship with Rolo is also, obviously, going to be a tumultuous one. “It’s going to be pretty hard to ever trust Rolo again,” Fimmel explained, “but he’s blood and the most important thing to Ragnar is his family and his blood, and [there are] certainly big obstacles to overcome with Rolo but they have a good arch this season.”

That other Vikings teaser: The one with all the blood >>

Actor George Blagden, who plays Athelstan, explained, “It would have been far too easy for us to have made Athelstan just [a] completely converted pagan, and sort of gung-ho into Viking life. What you see throughout the first few episodes of Season 2 is maybe this attempt and potentially a bit of a bluff on Athelstan’s part. What I think, hopefully, we’ve really been able to capture throughout Season 2 is this ongoing conflict Athelstan has.”

We wanted to know if Athelstan would have any temptations this season, specifically with women as he integrates into Viking life.

“Unfortunately, Athelstan’s journey becomes very, very, very dark and, let me just say, there’s absolutely no room in his life or mind, [his] emotional state, for any kind of temptation or women. It’s a mental and emotional roller coaster he goes on.”

Sounds like this entire season is setting itself up to be quite the roller coaster.

“Hopefully, across the course of this season we’ll be able to show [the audience] different sides of people and see if their perceptions can change, and I think the characters change along the way, as well,” Sutherland shared. “The beginning to the end, I think, is a really interesting journey.”

We can’t wait to watch it unfold! Vikings returns on the History Channel Feb. 27 at 10/9c.