After putting up with more than most women would, Paula Patton finally pulls the plug on her marriage with Robin Thicke. But is anyone really surprised? 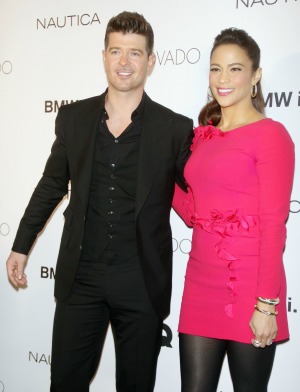 After what seems like eons of Paula Patton remaining poised under intense media speculation of her husband Robin Thicke‘s infidelity, the actress announced that the couple are separating. Here’s a list of reasons why we saw it coming, and why we are surprised it didn’t happen sooner.

1) Career trajectory: Everyone knows it’s important to find a compatible partner. One red flag that comes to mind is the major difference in career choices that Patton and Thicke have made. While Thicke’s successes are certainly nothing to laugh at, it’s pretty safe to say that Patton has taken a more conservative and respectable path while striving towards her goals. Patton has Academy Award-winning films under her belt (such as 2009’s Precious) and Thicke is singing about his private parts. Pretty much comparing apples and, ahem, bananas.

2) “Blurred Lines” video: This kind of goes along with career trajectory, but the “Blurred Lines” video was so blatant I think it deserves a category of its own. The video was simple in its visual concept, and featured a parade of scantily-clad women parading in front of Thicke, Pharrell Williams and T.I., who were both featured in the ditty. While there are Thicke fans who hailed the video as artistic, there is another group of people that saw it to be unimaginative, misoganistic and just plain dangerous. While it does appear that the song and video were conceived in fun, the message is certainly not that of a clean-cut family man.

3) The infamous butt grab heard around the world: After the 2013 VMA’s, Thicke attended an after party at 1 Oak nightclub in New York City and was caught on film grabbing the butt of a female fan who happened to be wearing a mini skirt. The fan in question blasted the photo all over various outlets of social media, and eventually the photo was tweeted to Patton. Here’s the kicker: The New York Daily News reported that Patton was at the same party with her husband. If that’s not respect for your wife, then what is?

4) MTV VMA performance with Miley Cyrus: Patton remained graceful when cameras panned to her during the performance and insisted she was cool with everything that went down on stage. But let’s be real here, who would be OK with someone nearly 20 years their junior publicly grinding and twerking on their significant other?!? Entertainment or not, that had to sting.

5) They were high school sweethearts: While everyone enjoys the age-old love story of a first, true love that was meant to survive forever, sometimes seemingly star-crossed lovers aren’t really meant to be. According to perezhilton.com, the two have been an item since they were just 14 years old. A lot of growing up and changing happens to a person from 14 to 36, and the two are probably not the same people they were when they met. Sometimes when couples are together for so long, it’s hard to say goodbye.

It’s purely speculation, but it’s totally possible Patton held on through all of Thicke’s bad behavior because it seemed impossible to let go. Until now.