Jimmy Kimmel has two grown children and thought he was done, but it looks like he will have to baby-proof his house once again. He and his wife are expecting a child. 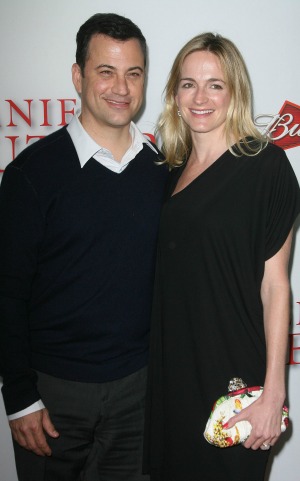 At 46, Jimmy Kimmel is about to be a dad again! The talk show host has two children from a previous marriage, but will again be welcoming a child — this time with his wife Molly McNearney.

McNearney is co-head writer on Jimmy Kimmel Live, and the couple began dating in 2009. According to People, they became engaged while out on an African safari in 2012 and married in July 2013. Kimmel announced the exciting baby news on the Ellen DeGeneres Show in an episode that will air Wednesday.

“I’ve really forgotten everything. It’s funny because I was just with [John Krasinski and Emily Blunt], who just had a baby and I was like, ‘Oh, ya. And there’s new ways to do things,'” he told DeGeneres.

Kimmel’s two children could be having babies of their own. Son Kevin is now 20 and Katie is 22. The proud dad is not without his worries about having a child at his age.

?”I told my daughter, ‘Listen, there’s only so much love I have to give — you’re gonna have to split it up with the new kid,” Kimmel joked. “There’s a finite amount of love and that’s that.’ So they’re dealing with it, but it is very weird at my age. I’m going to be one of those old dads.”

LOL! Watch the famous read mean tweets about themselves >>

Since Kimmel already has both a son and a daughter, he isn’t too concerned about the baby’s gender this time. He said, “I would like it to be a surprise and my wife was happy with that idea until about a week ago. She started saying we really need to find out. But I don’t think it matters. I don’t think you need to make the baby’s room blue or pink — it’s inherently ridiculous. I don’t think they can even see colors.”