Katy Perry made a special appearance at Miley’s Bangerz tour over the weekend, but she got a surprise she wasn’t expecting — a makeout session with Cyrus. 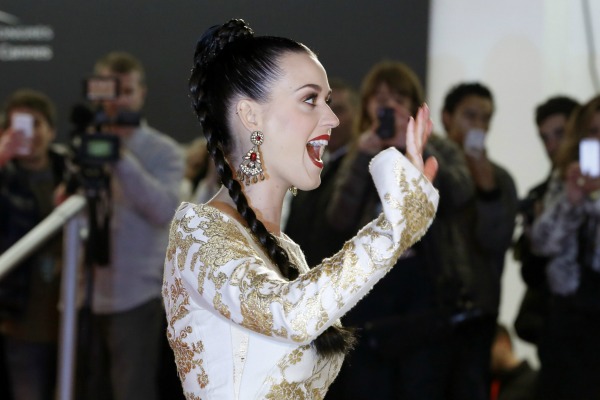 Some big names showed up to Miley Cyrus‘ Bangerz tour over the weekend, including Khloé Kardashian, Hilary Duff, Sarah Paulson, Diane Keaton and Katy Perry. The “I Kissed a Girl” singer had front-row seats to the show, and found out that sometimes that means you get to be a part of the show.

Perry had been tweeting her excitement to be at the show. Just before it started, she sent out a request for her favorite songs.

But Perry got even more than hearing her song requests. In the middle of the show while Cyrus was singing her song “Adore You” when she reportedly bent down into the front row where Perry was sitting and gave her a kiss on the mouth.

“I just kissed a girl and I really liked it a lot,” Cyrus said after the kiss.

It looked like Perry leaned in for the kiss, but didn’t realize Cyrus was going to use her tongue in the process. She quickly got away from it as soon as that happened.

Are Miley Cyrus and Jared Leto hooking up? >>

Later on Twitter, Cyrus also posted a photo of the very public kiss, but later deleted the tweet. This isn’t the first of the news-making antics Cyrus has used since her tour started. Just last week, she was spotted chewing on a fan’s thong during the show.

Perry also posted a photo, but hers was the aftermath of the kiss, and showed how surprised Perry was.

And after! I adore you @MileyCyrus 👅 pic.twitter.com/xGU0UPna1S

Perry’s boyfriend John Mayer hasn’t yet commented on the kiss, but a video posted by a fan shows Perry was obviously an innocent victim in the scene. That video was posted on YouTube, and showed the kiss as well as the moments leading up to it.