Robin Thicke is persona non grata at Boston University because of his “sexist” song lyrics, says one student group. 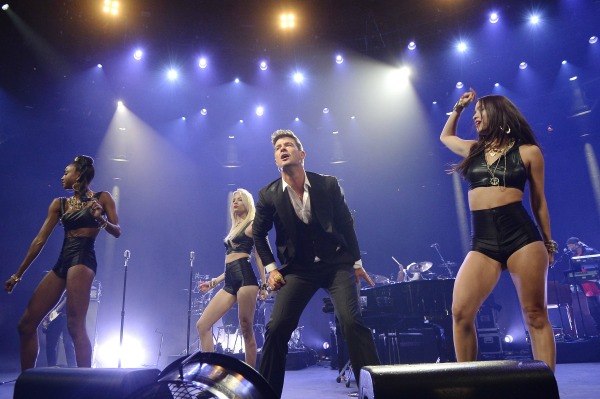 Boston University students say there are no blurred lines in their opinion of Robin Thicke: His music is sexist and they don’t want him playing at their school.

More than 1,600 people have signed a petition on Change.org started by the Humanist of Boston University to demand that a planned Robin Thicke concert at the prestigious school be canceled because of the sexist — and some say rapey — lyrics of his hit song “Blurred Lines.”

“Thicke’s hit song ‘Blurred Lines’ celebrates having sex with women against their will,” the petition states. “Lyrics such as, ‘I know you want it,’ explicitly use non-consensual language. And while watching the extremely explicit video, the insinuations grow from subtle to explicit to obnoxious.”

“One in five women in America experience rape or serious sexual assault in their lifetime, a figure that goes up to one in four during college… Most of these crimes go unreported, largely because of the shame society places on women who survive sexual assault. Rather than condemn the perpetrator, rape culture leads us to blame the victim. Indeed, the context of ‘Blurred Lines’ is not simply sexily clad women; the context is systemic patriarchy and sexual oppression.”

“Clearly, Boston University has been a bedrock for feminism and ideologies of equality more generally. It is a dishonor to our feminist history to symbolically idolize Robin Thicke by allowing him to perform his misogynist music at our university.”

Robin Thicke found something that rhymes with “hug me” >>

So will the March 4 date at the school’s Agganis Arena be canned? A university spokesperson told Fox News it is unlikely and that the university had nothing to do with booking the stop on Thicke’s 16-show tour.

But the voices of dissent will not be silenced. “We see this as a blatant form of reinforcing rape culture and sexism,” Patrick Johnson, the president of the Humanists of Boston University, told Fox.

Tell us: Do you think Robin Thicke’s song is sexist?