Sam Worthington has taught a paparazzo a serious lesson: Don’t mess with the people he loves or you will get punched in the face. 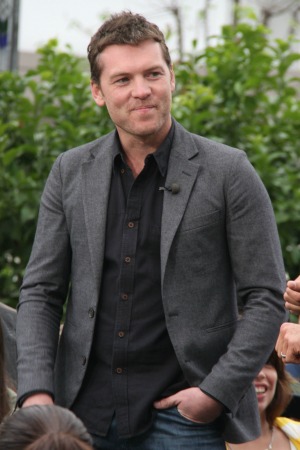 Sam Worthington has proven to the world that you shouldn’t mess with the people he loves.

The Avatar actor went into a rage on Sunday evening when a paparazzo allegedly kicked his girlfriend, Lara Bingle, in her shin whilst the couple were leaving the Cubbyhole bar in Greenwich Village in Manhattan, New York City, New York. So how did Worthington respond? He punched the pap in the face.

According to the Hollywood Reporter, the Australian actor was arrested for assault in New York City on Sunday evening after he allegedly punched photographer Sheng Li in the face.

Li suffered a laceration on his nose and apparently has been arrested and booked for reckless endangerment, harassment and assault. Worthington is said to have been released on bail but will be due back in court at a later date.

And as for poor Bingle, she was hurt during the incident and allegedly has a bruise on her shin. However, the story gets juicier because according to the Daily Mail, the star allegedly shouted at Li and referred to his model girlfriend as his wife. Worthington said, ”You kicked my wife.”

See Sam Worthington go criminal in Man on a Ledge >>

The use of the word “wife” has now fueled fresh speculation as to whether the pair actually did decide to tie the knot in a secret ceremony in Western Australia earlier this year. And both lovebirds have been spotted wearing matching rings on their wedding fingers.

However, a source denied the marriage rumors to the MailOnline, saying, ”He would have been speaking figuratively. They are definitely not married, as far as I know.”

Unfortunately for Worthington, this is not his first run-in with the law. In 2012, the Wrath of the Titans star was arrested and pepper-sprayed following an argument with a doorman outside a restaurant in Atlanta, Georgia, because the doorman allegedly refused the actor entry into the restaurant.